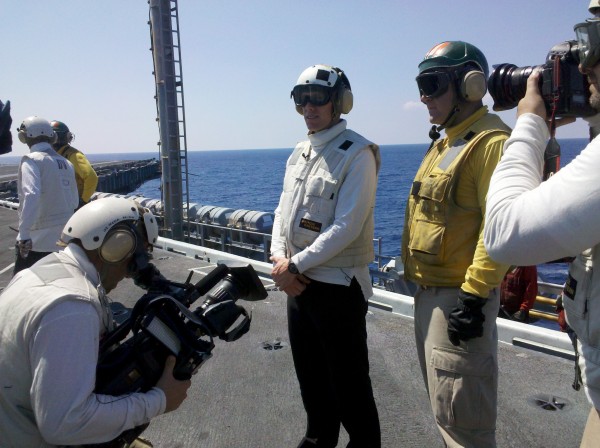 Raleigh Crew Tailhooks onto the USS Eisenhower with Carl Edwards

Working in this business, it’s never the same, it’s like being stuck on random play.  One day you’ll be in a hotel conference room for 10 hours shooting green screen interviews, the next day you’ll be loading in a C-2 Greyhound flying a couple hundred miles off the east coast of the US for a shoot with Carl Edwards on the USS Eisenhower.  One things for certain, this ain’t no commercial flight, no peanuts, no ginger ale, no moist towelette. The  flight to the ship ends with a hook landing on the flight deck of the IKE, they call it a ‘arrested landing’.  I’ll put it in perspective, 105mph – 0 in 2 seconds, no sh#!t.

Shooting with the Panasonic HDX 900 and a couple of Go Pro’s.  I gave one Go Pro to  Edwards so we could get his  POV, plus trying to move through the ship with the HDX 900 can be treacherous because of the narrow spaces.  We spent most the time on the IKE visiting sailors and thanking them for their service.  Edwards signed autographs, took photos and got to know many of the sailors aboard the ship.  The crew even baked Edwards a personalized birthday cake and sang “Happy Birthday” during his visit to the mess hall.

As the visit came to a close, we all suited up and  boarded the C-2 Greyhound preparing ourselves mentally for the catapult launch off the ship, think 0 -130mph in 3 seconds.

Keep it stuck on random.