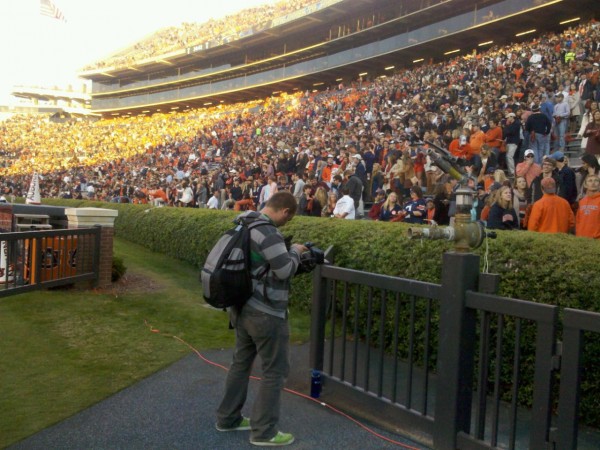 Nashville Crew Heads to Auburn With the Music Initiative

War eagle, y’all!  I was in Auburn, AL for the weekend with the Music Initiative.  Armed with a Panasonic HVX-200 and a Nexto, I found myself covering all the pregame action.  Our day started on a practice field with Auburn University’s marching band.  It was really cool to see how they get ready for the big day.  When practice wrapped we got a few interviews with band members.

The next stop was at a frat house where the pregame party was in full swing.  Musician, Thomas Champagne was rocking out while others enjoyed good food and drink.  We went around and got interviews with tailgaters, asking them what their favorite game day traditions are.  Afterwards we had them try some Palmetto cheese, which is sponsoring these Music Initiative shoots.

Before I could say, “War Eagle” it was time for the marching band to do their thing.  I was on the sidelines getting some great shots of the marching band and the crowd.  Our day ended at a deli where we grabbed some food and dumped all our footage from the Nexto onto the client’s laptop.  I just love how easy the Nexto makes it while working with P2.  War Eagle!