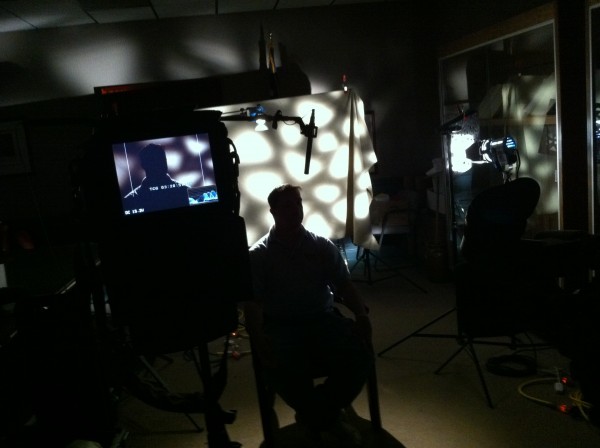 Nashville Crew Hits the Road with America’s Most Wanted

Posted 14 May in Dallas Video Camera Crew by Roger Woodruff

I’m just going to cut to the chase; I love shooting for America’s Most Wanted.  For starters there is never a dull moment, their interviews are fun to light, and you get to work with the men and women in blue.  My latest journey with AMW took me to three different states in only three days.

I spent the first day in Atlanta shooting interviews and broll for a  capture story.  I was rocking the Panasonic HDX-900.  This shoot definitely challenged me a bit.  That’s because they had just moved into the home we were shooting in.  So there were no pictures on the walls and the house just didn’t feel complete.  The other challenge was I could only shoot in one room.  Luckily the room was pretty long but it was also narrow.  In the end I was able to get three different looks in that room thanks to some creative lighting and set decorating.  After the interviews were finished I shot some broll of the family making dinner.  We then packed up, rearranged some furniture, and I hit the road for Spartanburg, SC.

Day two started off with setting up for an interview at the Spartanburg Sheriff’s Office.  The detective hooked us up with a pretty big conference room.  The catch was we had to push a giant conference table out of the way.  (I swear I’m a cameraman and not a furniture mover so please don’t get any ideas) After shooting the interview with the lead detective we spent the rest of the day getting broll.  The victims of the case we were covering sold motorcycles so we got shots of friends ridding their bikes through the South Carolina countryside.  Before we knew it the sun had set.  We were supposed to shoot one more interview that night but the interviewee backed out at the last second.

The final day with America’s Most Wanted started with three more interviews at the sheriff’s office in Spartanburg.  We shot the first interview outside so I pulled out a few HMI’s.  The other two interviews were shot in the same room we set up in yesterday.  We then headed over to an impound lot to shoot a car that had been torched.  After a quick bite to eat we headed out to Cowpens, SC for the final interview.  On the way we grabbed some scenic shots of South Carolina countryside.  With the final interview in the can we shot a few more scenic shots before we lost the sunlight.  I handed the tapes to my producer, said our goodbyes, and I was back on the road again.  Can’t wait to shoot for AMW again!