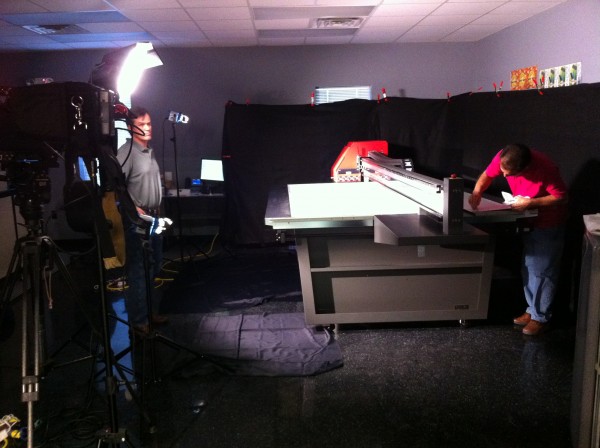 Posted 21 May in Dallas Video Camera Crew by Roger Woodruff

I feel like a broken record every time I say this but the best part about my job is that everyday is different.  Well, my shoot in Huntsville, AL was definitely different.  I spent the entire day shooting big industrial printers.  Armed with my trusty HDX-900 and a Nano Flash I got to work.

The first printer was a little tricky to shoot.  It was very close to the wall and difficult to move.  The fabric I brought to use as a background just wasn’t falling off enough because the printer was so close to the wall.  I decided to switch to black fabric instead.  In the end it gave the footage a slightly more dramatic look.  With no distracting pattern in the background all the focus was on the product.  I set up a few lights to evenly light the printer and high light some features.  Once the client gave the thumbs up I started shooting the printer in action.

The second two printers were out in the warehouse part of the building.  This made the process easier because there were no walls to fight.  I lit the other two printers the same as the first.  I filmed them in action and then shot some beauty shots of what they actually print.

This was scheduled to be a day and a half shoot but we accomplished everything we were sent there to do in just a day.  On the way back to Nashville I transferred all the footage from the Nano Flash to a hard drive.  The next day I shipped out the hard drive and tapes to the editor in Chicago.  I can cross shooting big printers off of my bucket list now.