Posted 15 May in Charlotte Video Camera Crew by Ryan Dumville 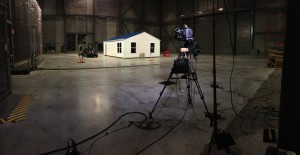 So did anyone else watch that hailstorm unfold live on Weather Channel a few weeks ago? If not here’s a little BTS commentary from the shoot, enjoy!

When you talk about recreating mother nature at a lab in the form of wind turbines and hail cannons, there’s a good chance that Weather Channel and Go To Team will be there to cover the action. This was exactly the case on a recent shoot with Jim Cantore and I at IBHS in Richburg SC.

So you are probably asking yourself…. What’s IBHS? IBSH stands for The Insurance Institute for Business and Home Saftey and they were conducting the first ever full-scale hailstorm in an indoor controlled laboratory setting. Pretty cool right?! Historically speaking, there has never been a test of this scale conducted before so you can imagine the intensity involved not to mention all of the other media outlets surrounding this event. We first set up inside the lab with a lock down shot of the facility for TODAY Show to bump to periodically. We also shot a few standups here with Canotre as he gave us some pre test analysis.

Various other media outles shooting from the observation deck.

What started out as a laid back morning would soon escalate into a full fledged camera gear/audio blitz throughout the controlled access facility with the several back to back camera positions, one being on scissor lift. Meanwhile our live truck op was dodging the droves of other media and PR people to reroute our fiber lines to each location. The shoot was intense but equally as fun in the end. It’s always cool to see science and meteorology unfold right in front of you! 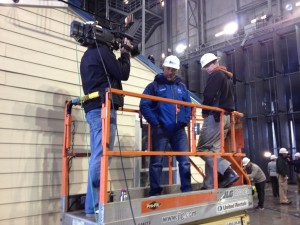 Canotre and I standing by to inspect the hail damage to the roof and vinyl.

Having never worked with Cantore before, I learned really quickly that he wants to be “a snake in the grass” so we had fun running around together to get all of the shots we needed. My passion as a videographer has always been a culmination of creativity and shooting as much cool stuff as often as possible. What a rewarding shoot capturing “NATURES” special moments even though it wasn’t really nature, which made it all the more interesting. I had a blast and I can’t wait to wok with the Weather Channel folks again.