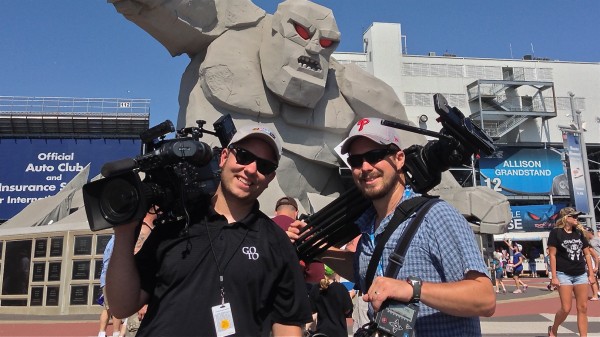 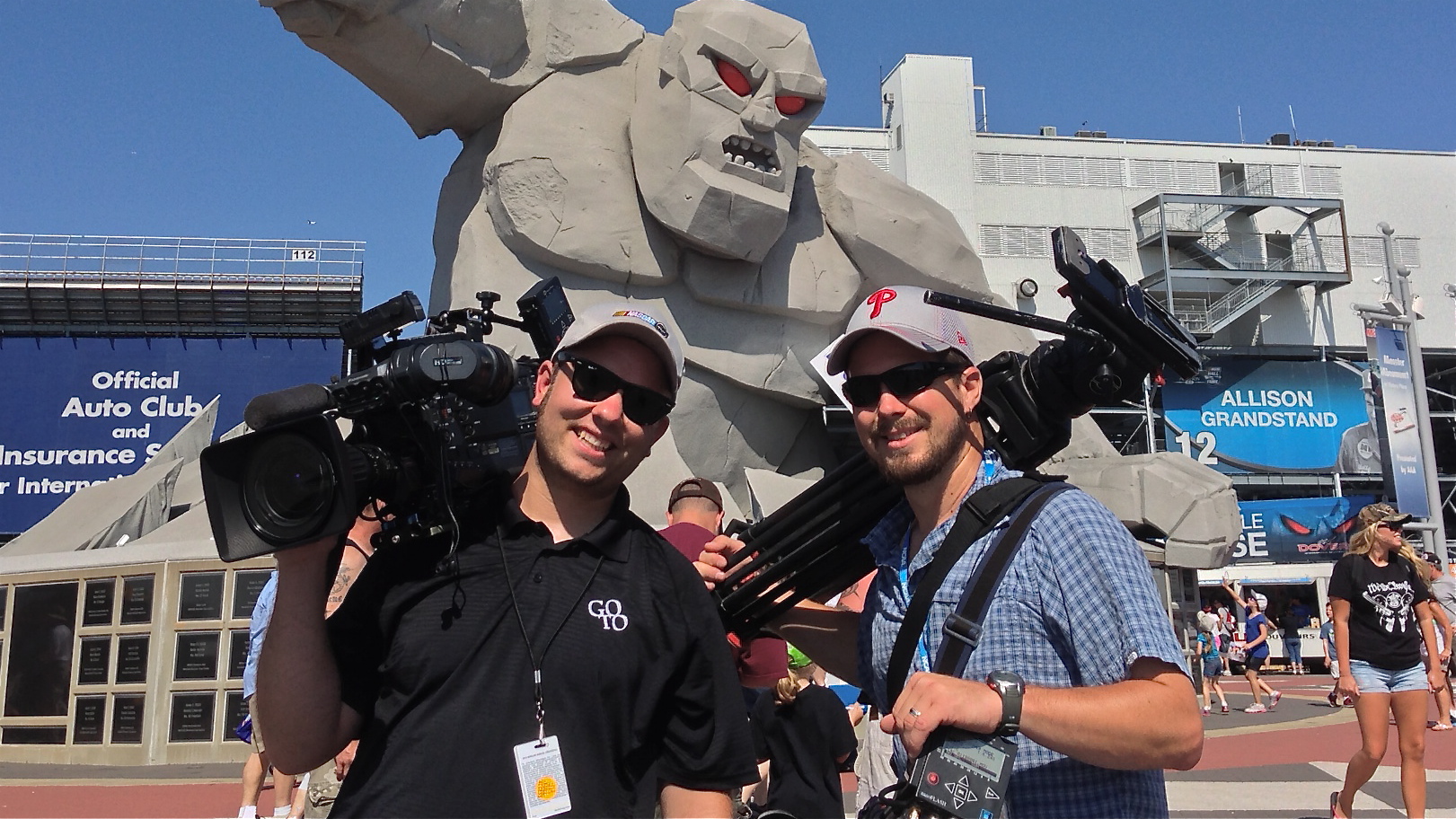 I recently spent six weeks on the road for TNT shooting features for their NASCAR pre-race show.  If that wasn’t cool enough, I also got to work along side GTT Charleston DP, Dave Baker.  AND just when I thought it couldn’t get any better it turns out the gig involved spending each week with one NASCAR driver and seeing what their lives are like when they aren’t at the track.  Armed with some super cool gear, Dave and I hit the road. 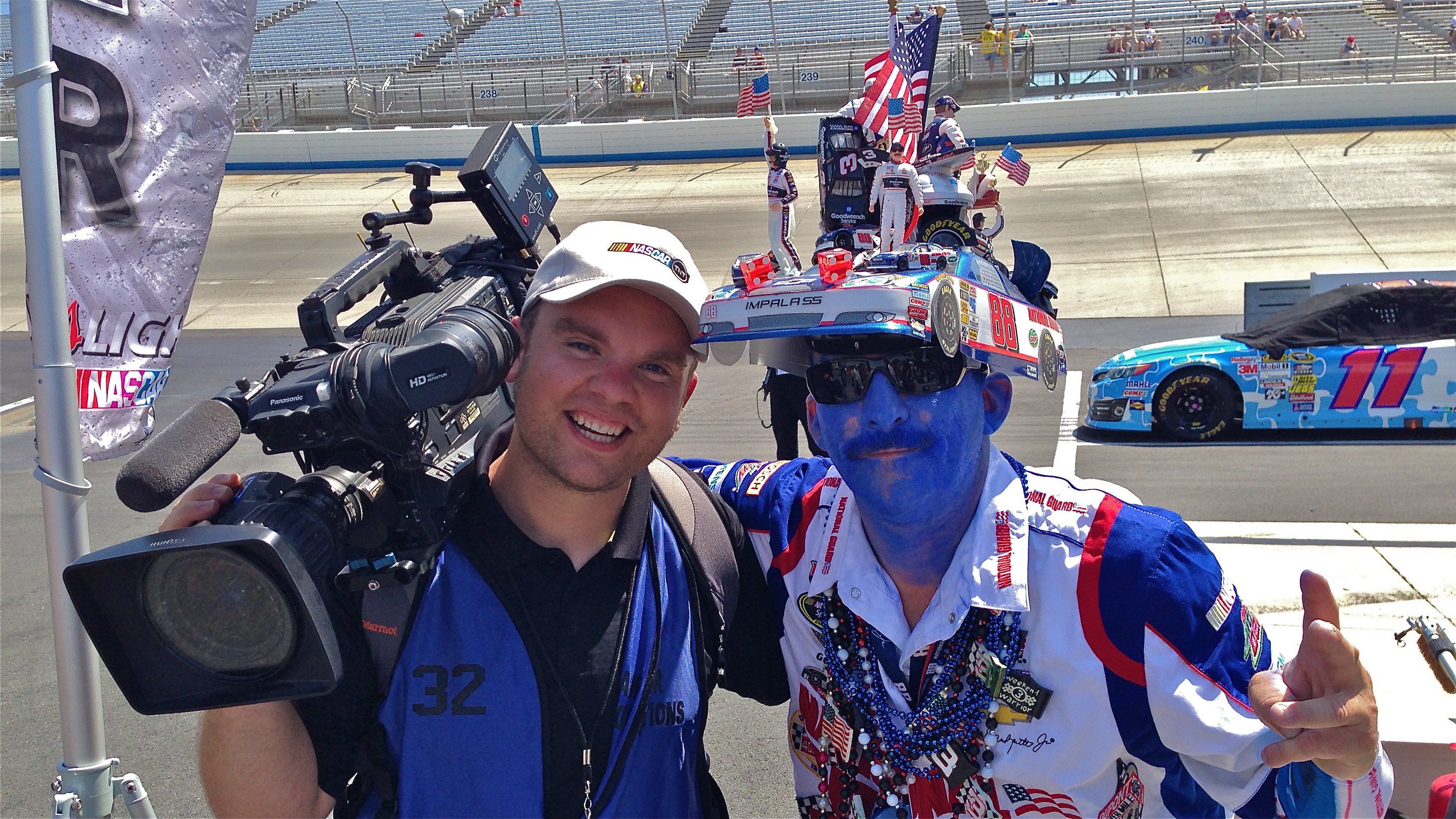 I met “Tony NASCAR” along the way too.  Who’s Tony NASCAR?  I have no idea but he does have a Facebook page.

Seven races, six weeks, six drivers, two DPs, two producers, one audio guy, and a ton of air travel best sums up this adventure.  This was such a travel intense gig, it’s hard to know where to start this blog.  I guess I’ll just start at the beginning.  Our mission was to capture the essence of what our NASCAR driver of the week does between races.  TNT called these pieces “All Access” features which tied into the whole theme of their race coverage.  The end result was that not only did we get to see how six NASCAR drivers spent their week we also got an insider glimpse into the personality and priorities of these drivers.  As a life long NASCAR fan it was like experiencing heaven for six weeks.

We used a lot of different gear to get the job done.  Our primary camera was the Panasonic HDX-900 with a Nano Flash attached.  We were shooting 1080p -24p.  This was a super run-and-gun shoot so the HDX-900 was a perfect choice.  For specialized b-roll and sit down interviews we used the Sony F3 and the Canon 5D.  We also used the Hero 3 Go Pro for various shots inside the racecar and in other interesting spots.  To really kick the production up a notch we also put the MYT Slider to good use. 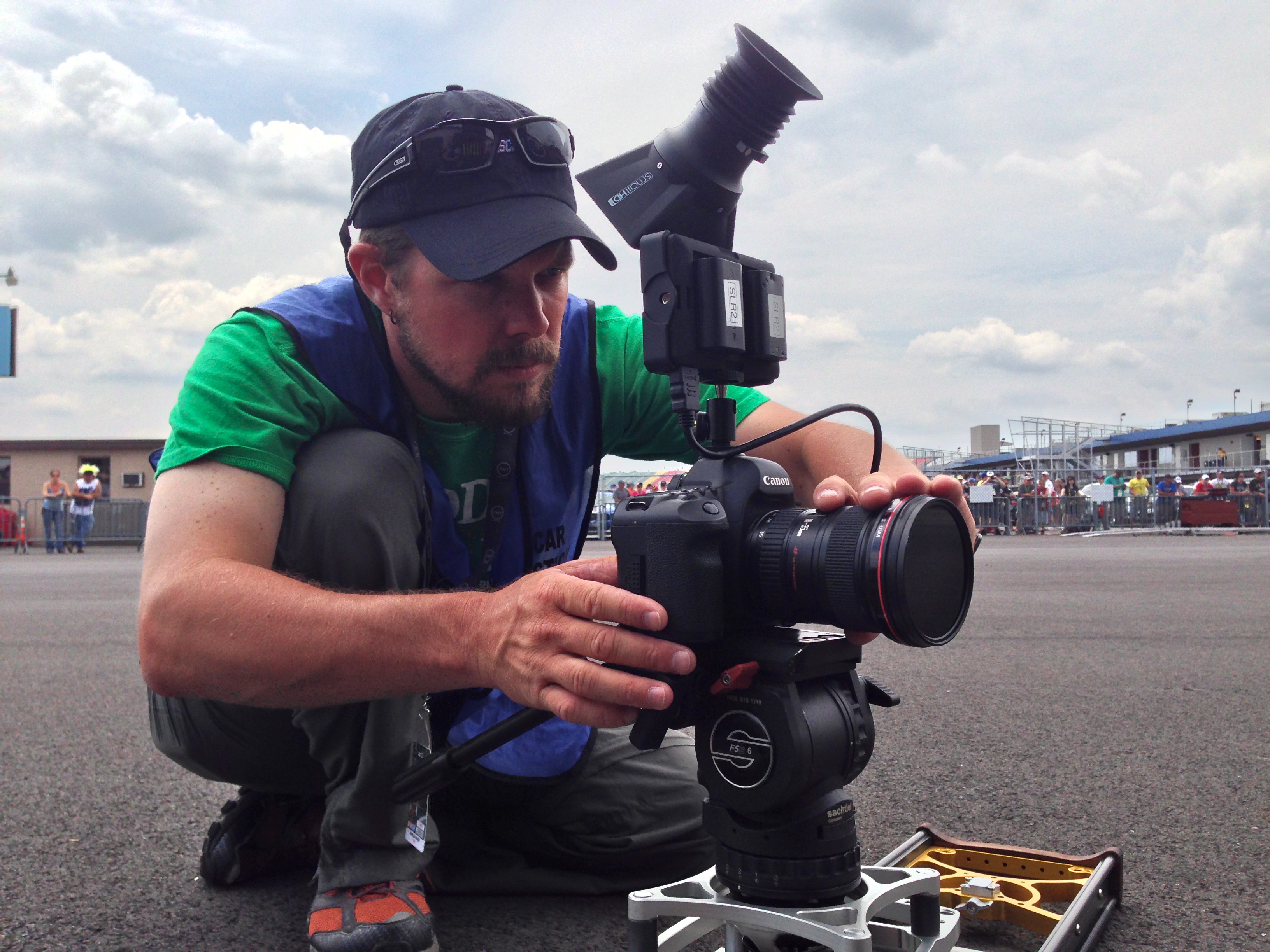 Dave Baker rocking it on the MYT Slider at Michigan International Speedway.

Dover was our first location.  Denny Hamlin was our first driver.  Wait, I should stop for a second.  I wish I could give you a play by play of our six-week adventure but I would end up writing a book.  Instead, consider this a highlight reel of some of the coolest things that happened during an already super cool six-week shoot with TNT. 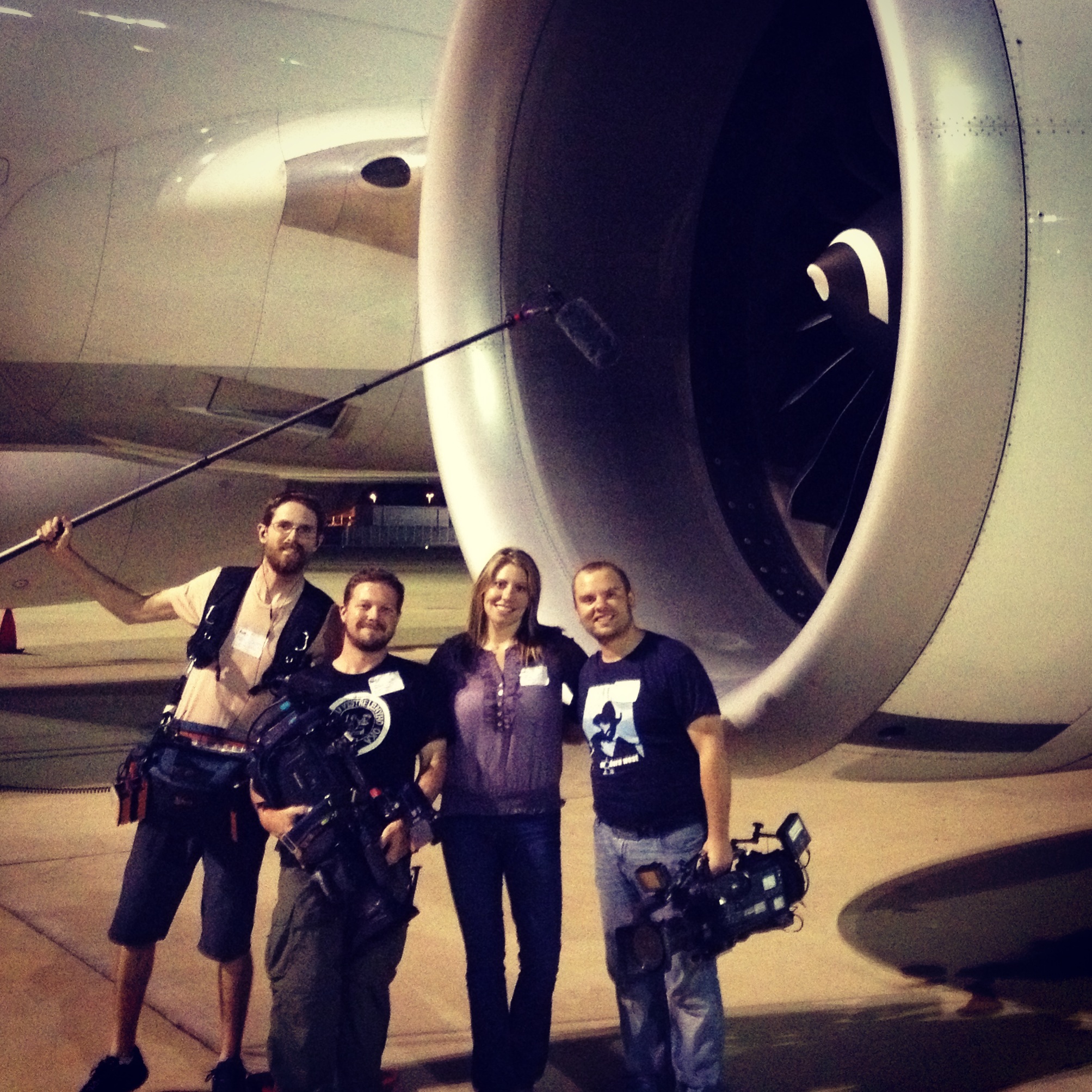 As I was saying, Denny Hamlin was our first driver and we met up with him at Dover.  Denny’s main sponsor is Fedex.  Via the Joe Gibbs Racing private jet we ventured out to Memphis with Denny and the team.  They got a personal tour of the Fedex World Headquarters.  It was amazing to see the massive scale of their sorting facility.  It was also pretty amazing to learn that every single piece of express mail from all around the world goes through that facility.  Here’s a link to the Denny Hamlin all access feature: All-Access with Denny Hamlin

Pocono was the site of the first TNT covered NASCAR race.  While our Denny feature was airing we started our week with Brad Keselowski.  Spending the week with Brad was awesome.  We did a media tour with him in New York City and spent some time at the Penske Race Shop.  The coolest thing we did with last years champ was ride shotgun with him as he test drove some new Fords at the Ford Motor Company’s test track.  I was literally thrown around, clinching to a Canon 5D, while Brad drove the hell out of these streetcars.  I know I’ve already said this but I was in heaven.  Oh, did I mention he got us air borne in a Lincoln.  Heaven.  Here’s a link to Brad K’s all access feature: All-Access with Brad Keselowski

After the Michigan race we met up with Columbian native, Juan Pablo Montoya and his family at Cedar Point in Sandusky, Ohio.  I grew up about 90 minutes away from there in a suburb of Cleveland.  I spent a lot of summers there.  I never imagined I’d be spending the day there with a NASCAR driver and his family.  Heaven. Here’s a link to Montoya’s all access feature: All-Access with Juan Pablo Montoya 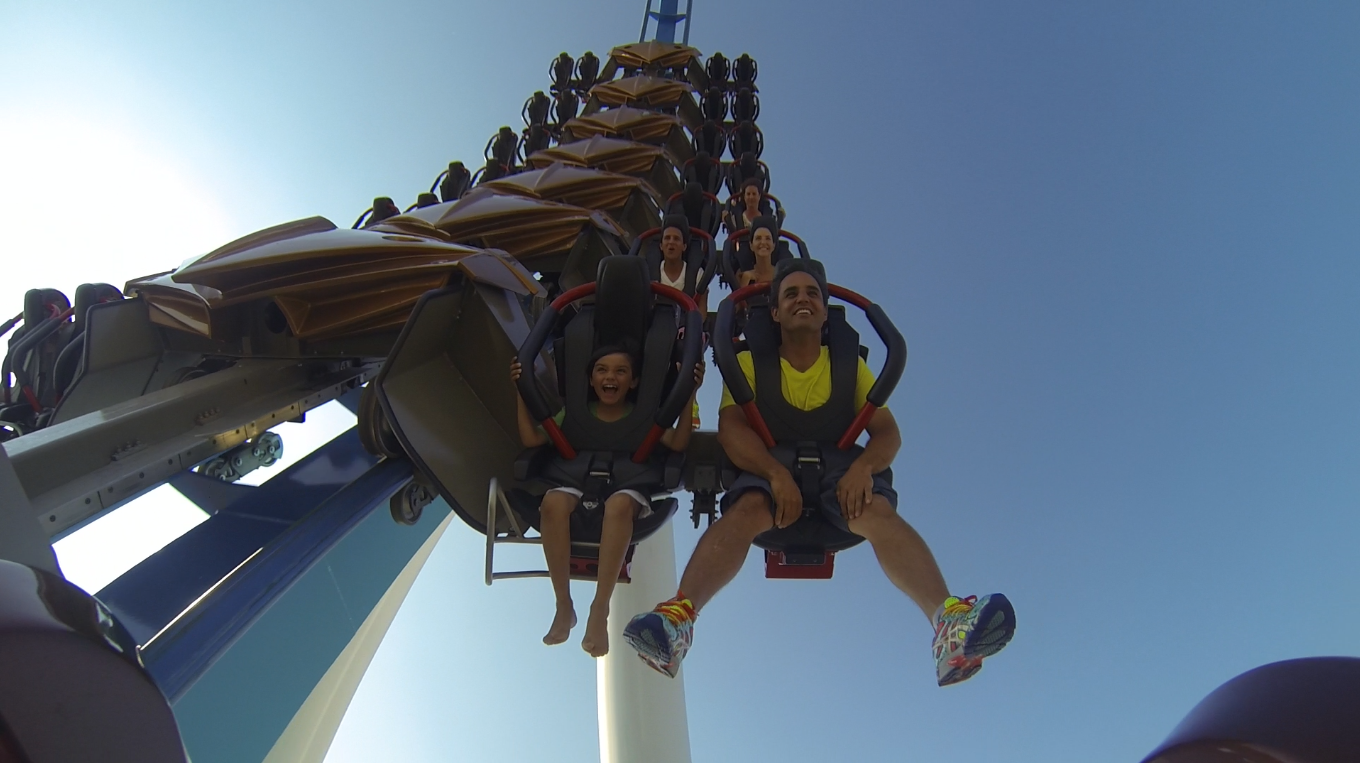 With the race in Sonoma behind us we ventured out to the D.C. area to go all access with Kurt Busch.  Kurt and his girlfriend do a lot of work for the Armed Forces Foundation.  It’s something that Kurt has been very passionate about for years.  While we were in the D.C. area we attend an Orioles game that he threw out the first pitch.  He spent the rest of the game with veterans from the armed forces.  The next day we ventured to Capitol Hill where Kurt and his girlfriend met with some congressmen to discuss the Armed Forces Foundation and a bill in limbo that could benefit the organization.  I think the Kurt Busch feature may be the best one we did simply for the fact that we see a driver who’s passionate about making a real difference in other peoples lives.  Check out the all access feature on Kurt Busch here: All-Access with Kurt Busch 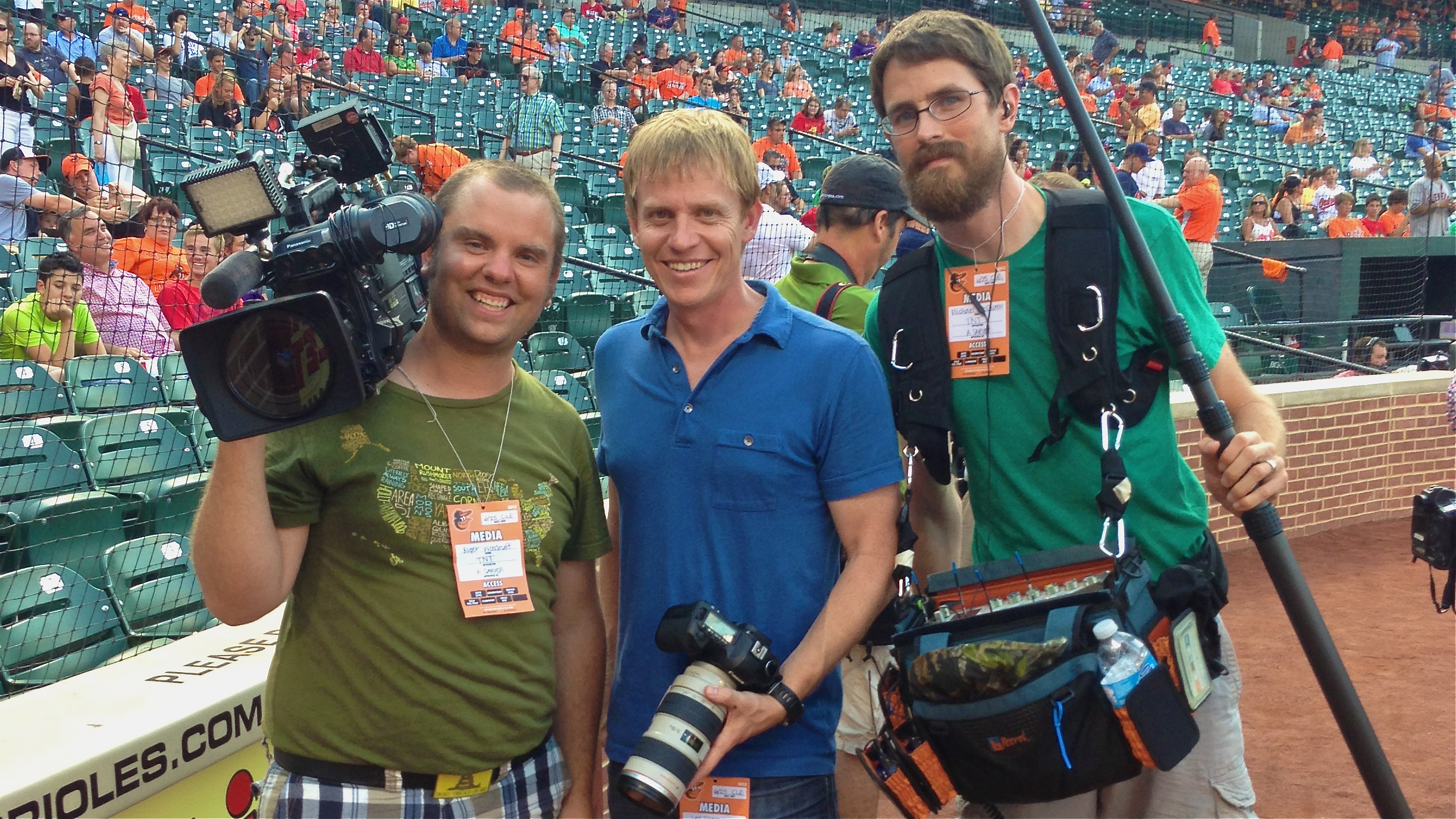 My self, Lee Shelton (producer), and Michael McQueen (audio guy) before first pitch at Camden Yards.

In Kentucky we met up with Carl Edwards and followed him to Daytona Beach.  We got a tour of his private jet in which he flies himself.  Carl was also nice enough to let us join him as he works out at the Daytona Beach infield gym.  Our week with Carl was capped by a gorgeous looking interview we shot with him using a Canon 5D and a 50mm f1.2 lens.  Here is a link to the all access piece on Carl Edwards: All-Access with Carl Edwards 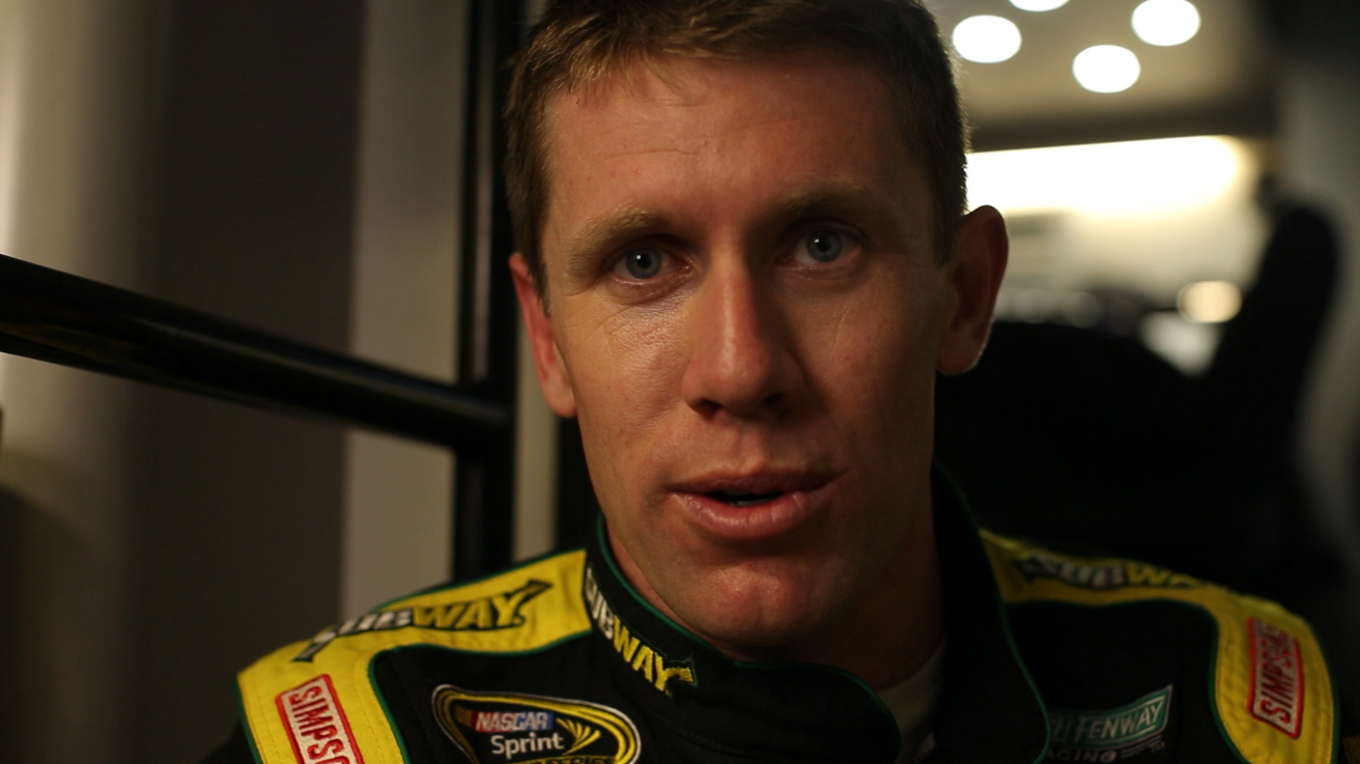 Interview with Carl Edwards in his hauler.

The last driver we followed was Marin Truex Jr.  Martin may be one of the most down to Earth guys on the circuit.  After an unfortunate wreck at Daytona we met up with Truex in Charlotte.  We spent the day fishing with the driver and his trusty dog.  From there we followed Martin as he visited some cancer patients at the local children’s hospital.  Our journey concluded with Truex at New Hampshire Motor Speedway.  We filmed him and his team as they prepared for Sunday’s race.  After the final practice we officially wrapped with TNT.  Here is a link to the final all access feature: All-Access with Martin Truex Jr.

Let’s get serious here; this six-week shoot was no picnic.  It was grueling at times.  The travel was extensive.  We bounced around all over the country.  We went from race track to race shop to random city and then did it all over again.  Countless hotel rooms and restaurants certainly made me miss the grill on my back porch back in Dallas, TX.  However, if you asked me to do it again I’d say, “Hell Yeah!” 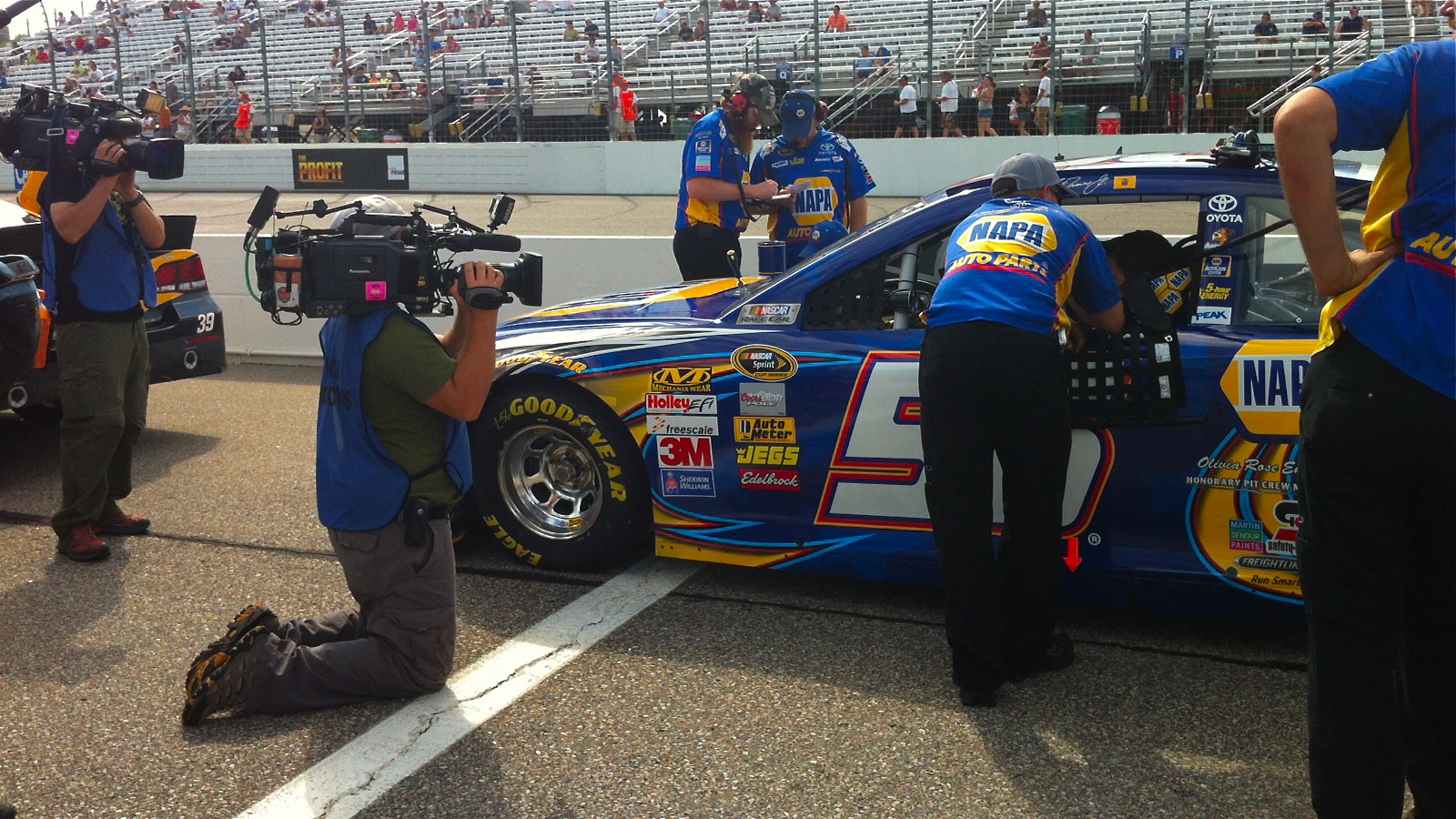 Dave and I shooting Martin Truex Jr. waiting to qualify.

It was a pleasure working with the people at Turner Sports.  It was also an amazing experience getting to collaborate with Dave Baker.  The cherry on top was that not only did Dave and I work on this project but a few of the other Go To Team guys got to as well.  It was a true team effort in every sense of the word.  If I could sum up my experience in one word it would be “Heaven.” 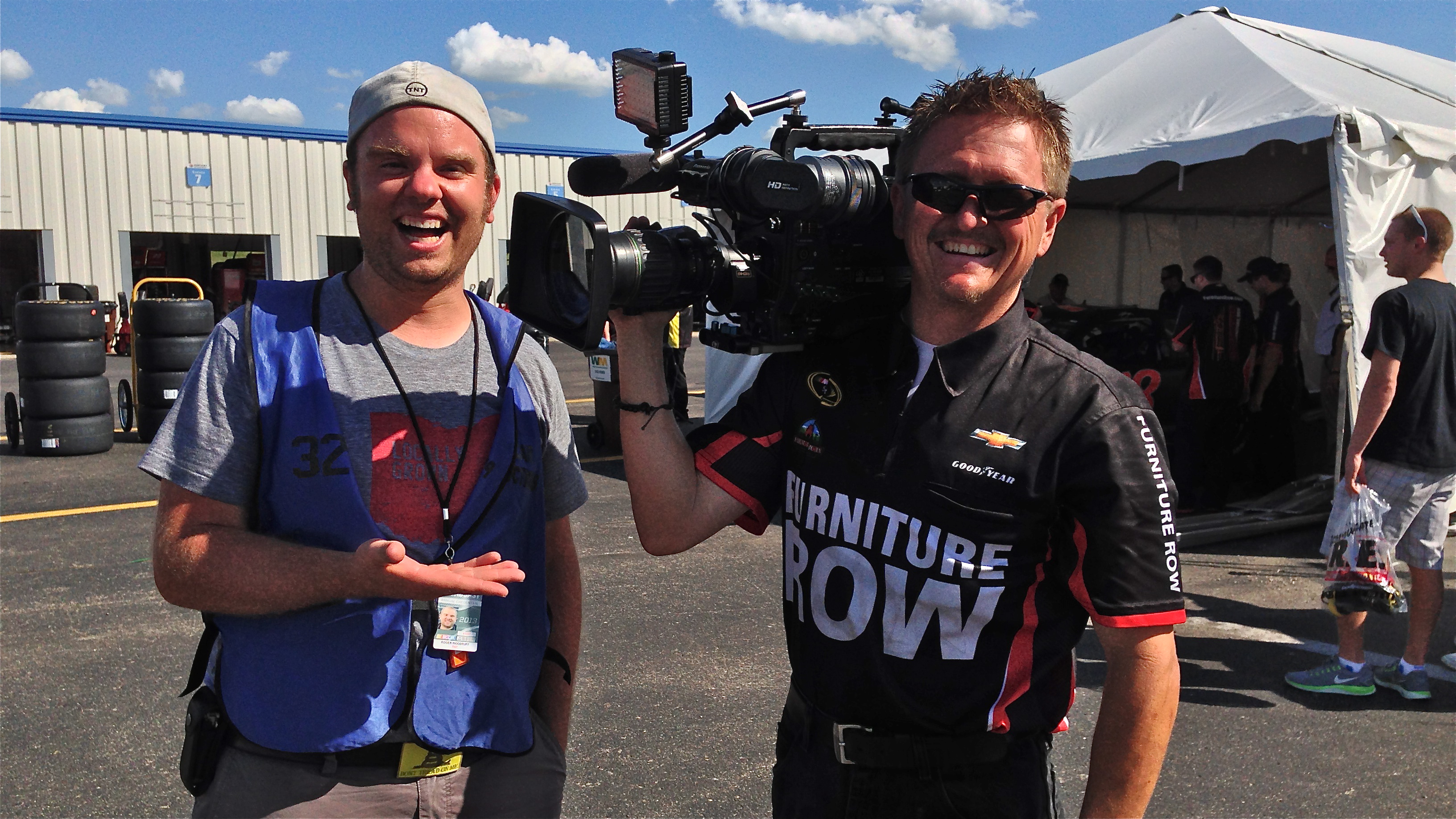 One of the best things about this experience was that we got to know members of the race teams as well. 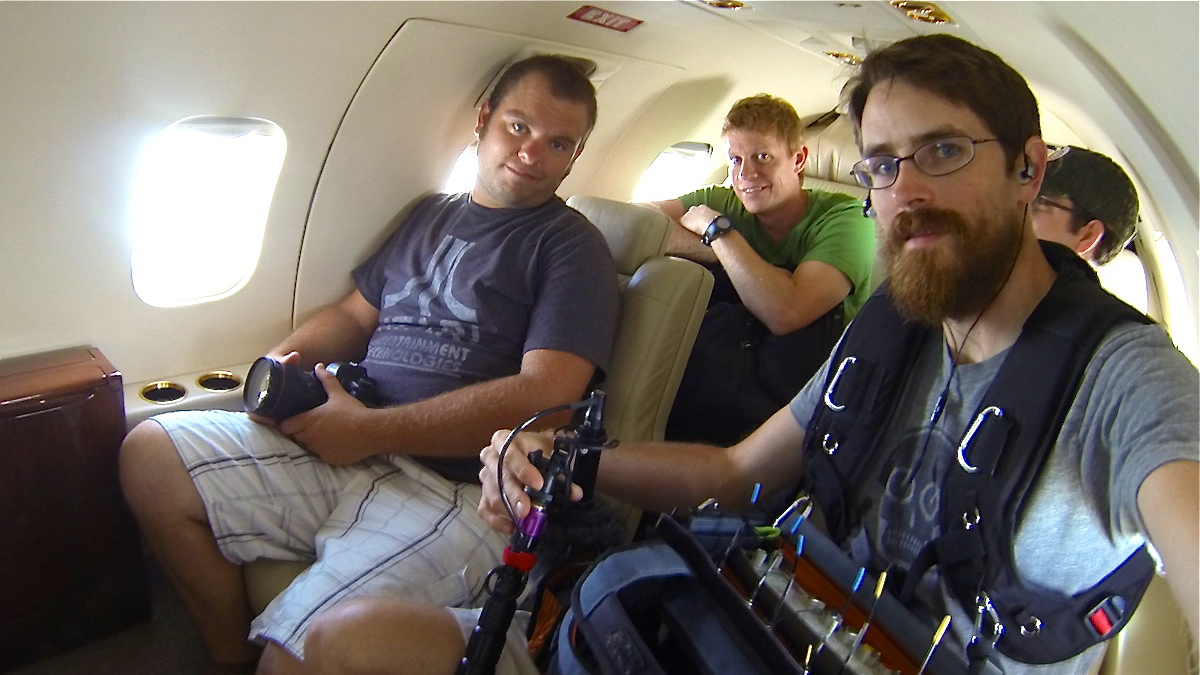 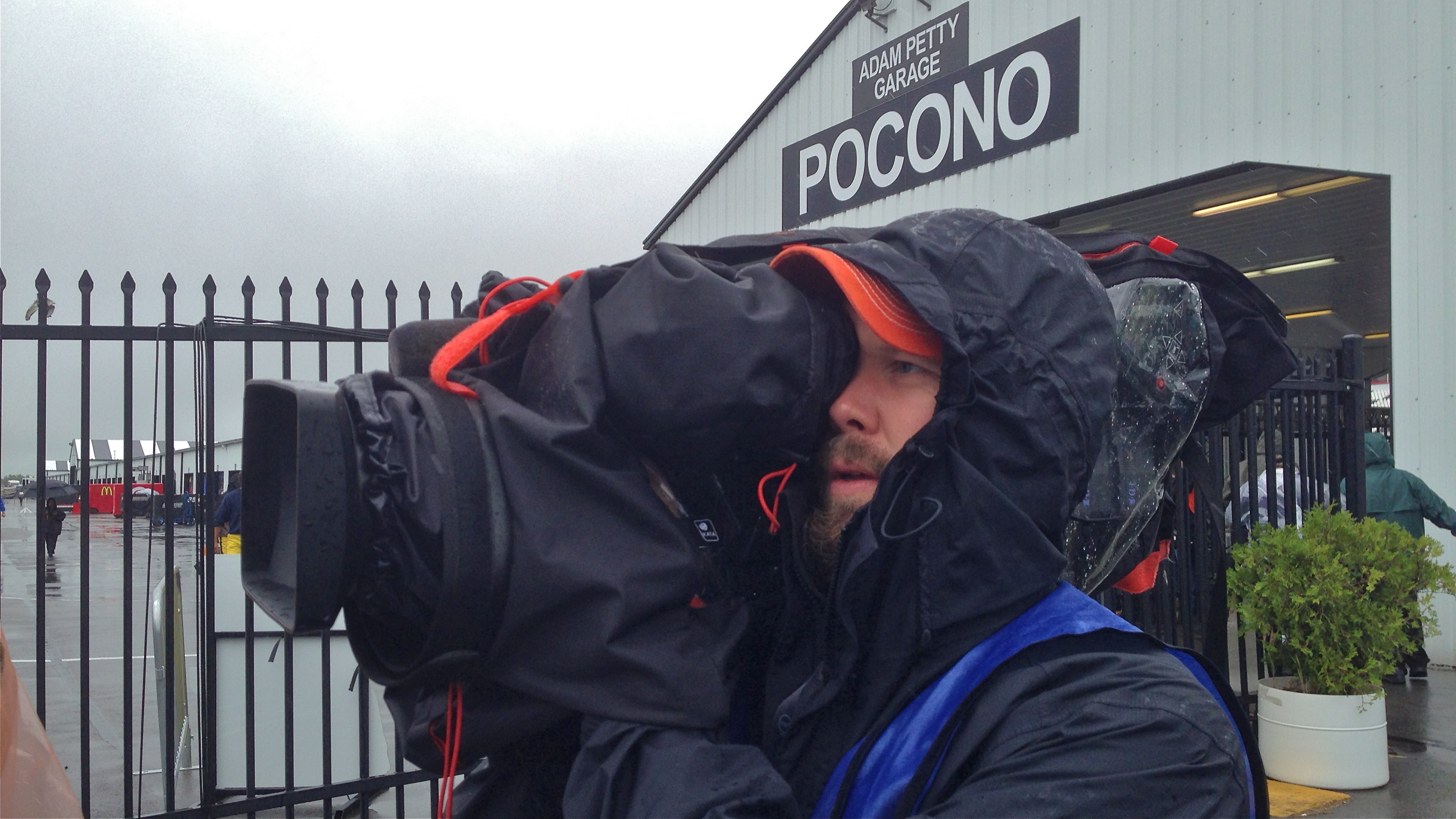 It wasn’t all clear skies and sunshine. We got a little wet too.