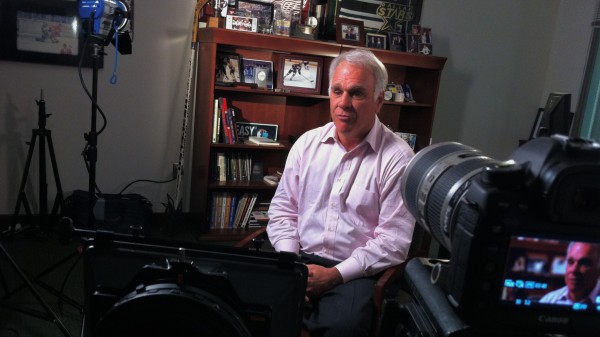 Posted 13 May in Dallas Video Camera Crew by Roger Woodruff 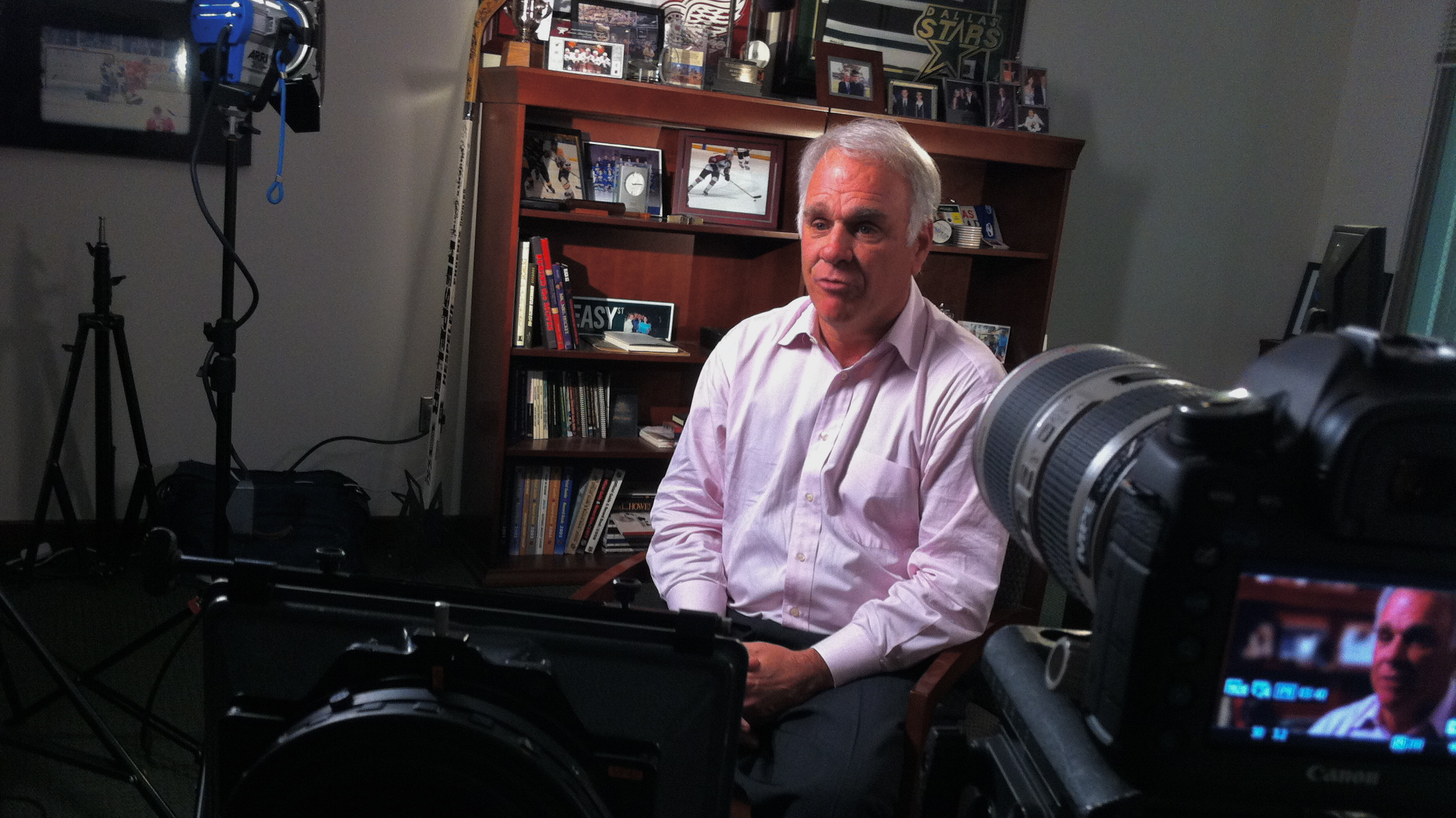 Shooting an interview in the office of Dallas Stars president, Jim Lites.

One of my absolute favorite series out there has to be ESPN’s “30 for 30.”  I don’t think I’ve ever seen one that I didn’t enjoy.  They’re always shot beautifully and tell a compelling story.  Needless to say, when I found out I was shooting for the series I was pretty pumped.

The “30 for 30” I worked on was about con man, John Spano and his attempt to purchase the Dallas Stars hockey organization.  The film’s director, Kevin Connolly, flew out to Dallas to conduct the interview and make sure we got the necessary b-roll.  And, yes, this is the same Kevin Connolly of the hit T.V. show, “Entourage.”  Seriously, somebody please pinch me.  Actually, wait, don’t. 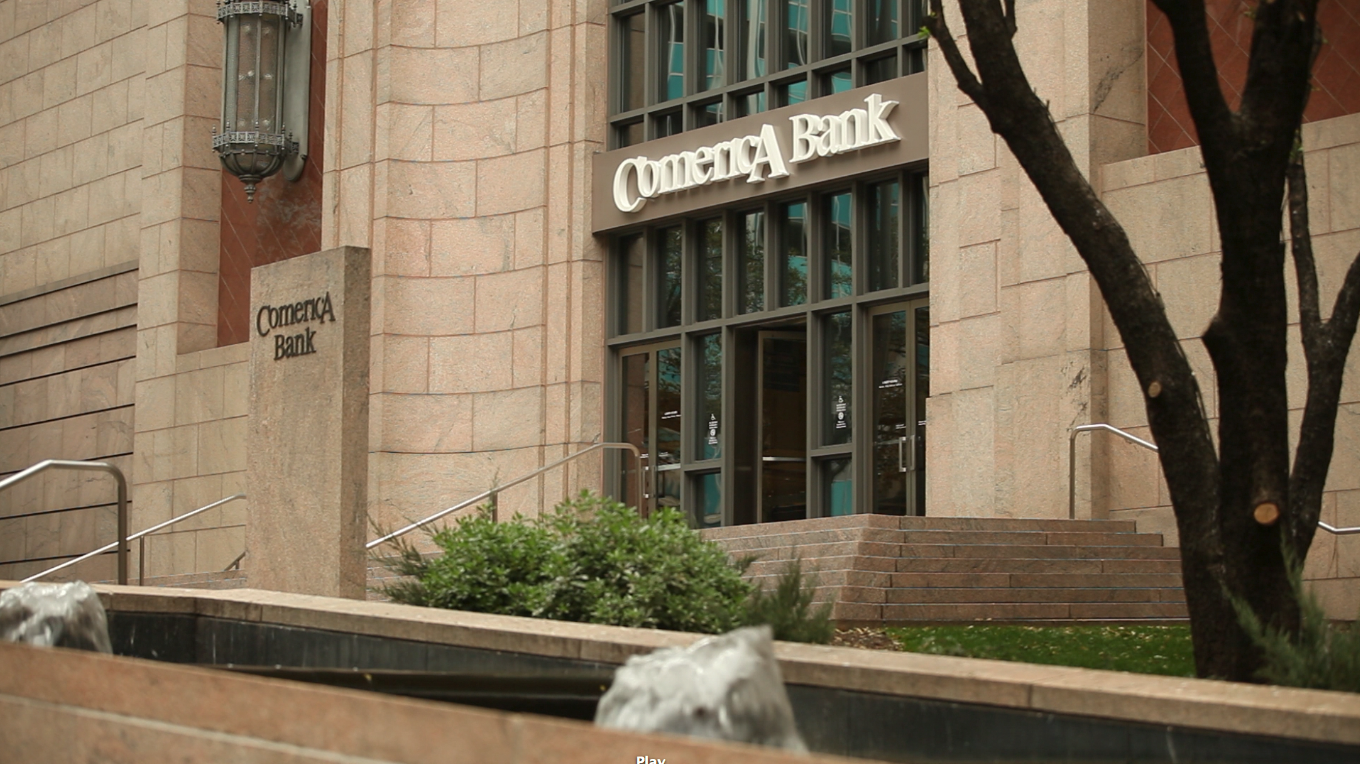 My day started off in downtown Dallas.  I shot some b-roll of Comerica’s Headquarters and the surrounding buildings in the banking district.  Afterwards I headed over to the airport to pick Kevin up.  From there we headed out to the University Parks neighborhood to get some b-roll of Mr. Spano’s old house.  We also shot some b-roll of the old office building at which John Spano use to work. 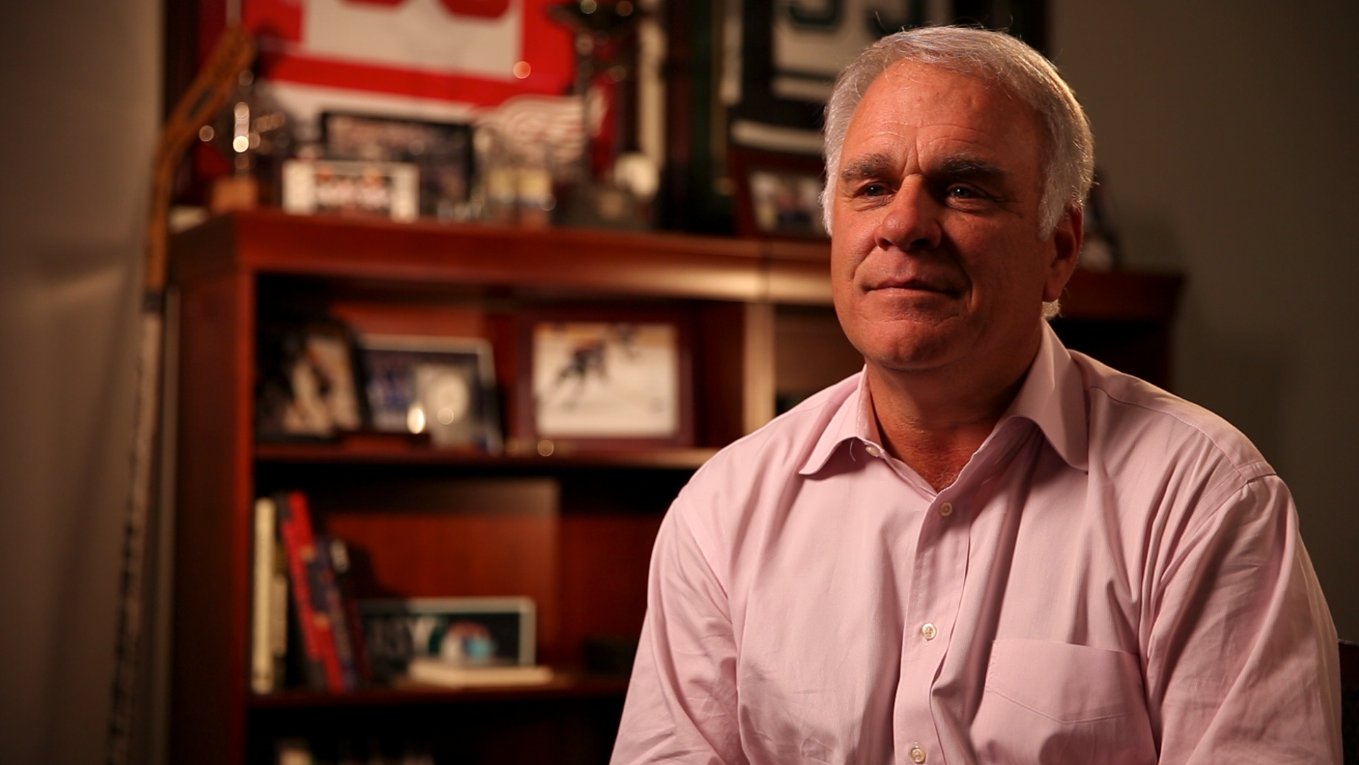 The medium shot from the Jim Lites interview.

Kevin and I then headed up to Frisco to shoot an interview with Jim Lites, president of the Dallas Stars.  I was shooting on two Canon 5Ds.  We set up for the interview in Mr. Lites office.  Kevin liked the hockey memorabilia in his office so we made that the background.  I used a 400w Kino Flo as the key and a 200w as a soft fill.  For the backlight I used a 150w Arri fixture.  For the background, two 300w Arri fixtures were used. 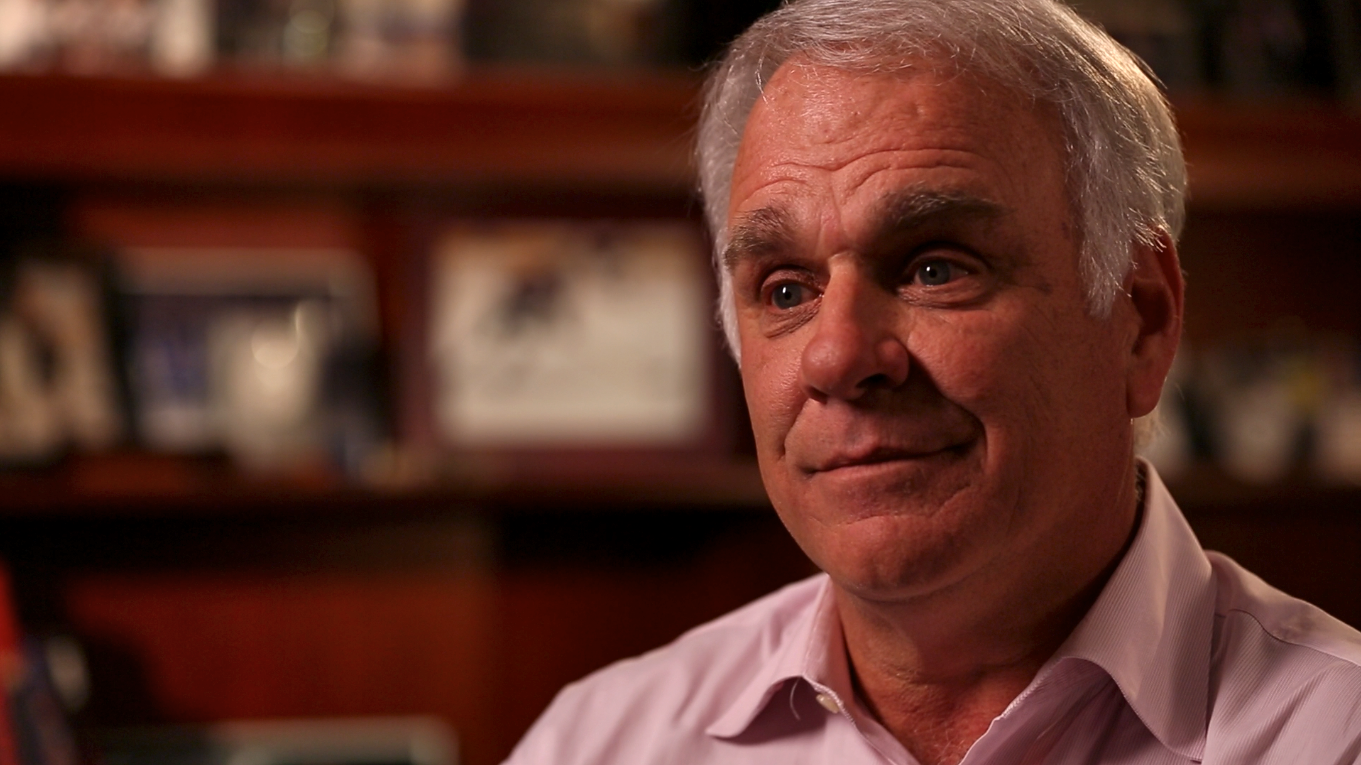 The close up shot from the Jim Lites interview.

The interview went great.  I was really happy with how the interview looked.  The producer had sent me some examples of other interviews they had done for this project and I believe that I matched the style pretty closely.  After the interview we headed back downtown to get a few shots of Dealey Plaza.  It turns out that Kevin is a huge history buff and wanted to get some shots of the book depository and the grassy knoll.  That pretty much ended our day.  There were two more shots Kevin wanted but he really didn’t need to be there for them.  I dropped Kevin off at his hotel and I headed out to get the final shots.

Kevin and the producer needed two evening shots.  The first is a shot of John Spano’s former house and the second was a Dallas skyline shot.  Once the sun started to set I got the shots.  Afterwards I made sure all of the footage and audio from the day was on the hard drive and shipped that out to L.A. 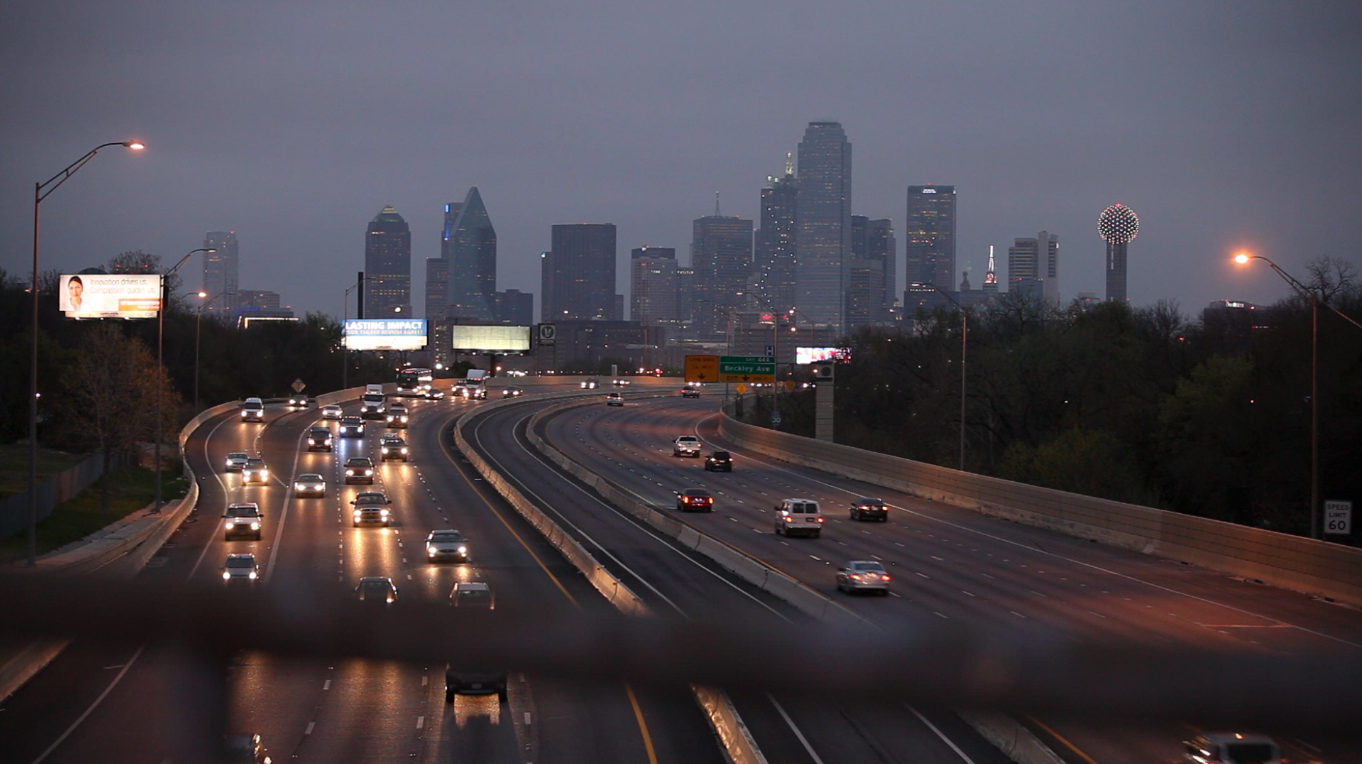 A night shot of the Dallas skyline.

I had a blast on this shoot.  It was great to meet and work with Kevin Connoly.  He was awesome and super down to earth.  I also had a great crew too.  All in all, the day just went very smoothly.  I can’t wait to catch this “30 for 30” in the fall of 2013 on ESPN.