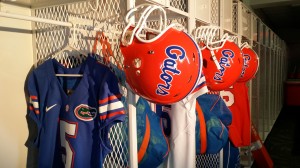 and his relationship with the QB’s.  I was tasked to shoot A CAM interviews, the meeting with the coach and players and B-Roll of the practice.  Intersport’s Director of Creative Services, Matt Romito, ran B CAM shooting some cool slow-mo on the Sony FS700 for the B-Roll footage  and coverage of the meeting.  We had a couple of interviews with some players and Coach Will Muschamp.