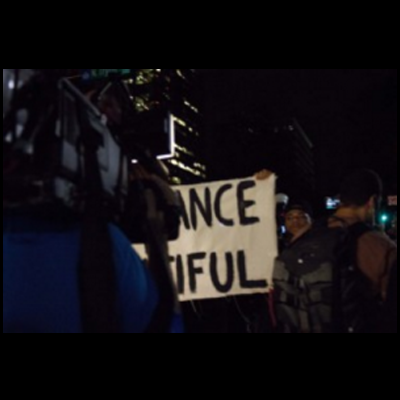 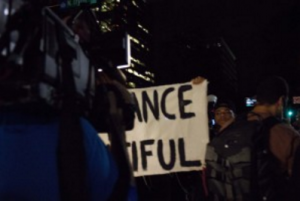 It’s 7:34 a.m. and I get a phone call.  It’s the office. They told that the night before, protests occurred in Charlotte, NC, sparked by the officer involved in shooting Keith Lamont Scott. Me and the other Southeast camera people were needed to head to Charlotte to cover it for several major network clients.

We hit the ground running, covering damage from the night before and hurrying to feed the footage. Most of the images were captured at night, when the protesters for Black Lives Matter began to gather near the Omni downtown. Protesters gathered as did the police…

After the highway was cleared. We got some tear gas and had to run up a steep hill.

Below is the footage we got when filming for Inside Edition.

Over the weekend, the demonstrations began to take place during the day when the police were planning to release body cam footage. First, we went around town and interviewed people in diners and at work to capture their thoughts. Later that day, we marched again with the protesters, getting stand-ups along the way. (I’m getting very good at walking backwards in a crowd of people.)  Things were non-violent and it was interesting to hear the views of people from different walks of life.

People from all generations came out to support the cause.

Below is the footage we got when filming for The View.

The last day we were there, we shot for FS1 with Jennifer Hale outside the Panthers football stadium. Protesters showed up prior to the game, linking arms in a circle while chanting. Police created a wall for the protest to keep out agitators and keep the protest in a contained spot. After a while, a street band set up beside the protest and jammed while the group chanted to the rhythm.

By game day, Sunday, the situation calmed. Police and protesters worked together as several generations converged on a path of peace.