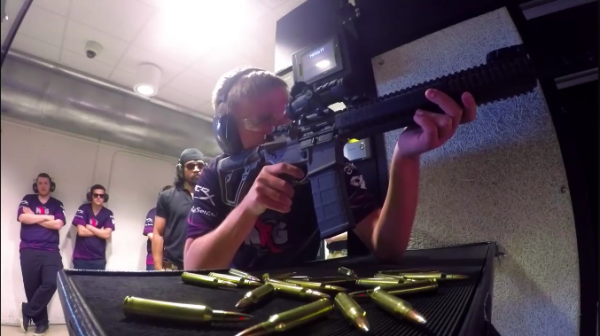 Atlanta Crew Teams Up with eLeague for Arby’s New Sandwich

Our Atlanta Crew teamed up with Arby’s and E-League to promote a new Arby’s sandwich with the help of eLeague teams: SoloMid, Echo Fox, NRG, and others. This shoot took place at Stoodard’s Shooting Range in Atlanta.

Filming this commercial was awesome because they brought in professional counter strike players and we got to see how well they can shoot a real gun with the targets being Arby’s sandwiches. Depending on how many times it took to hit the sandwich they would get awarded points. The team with the most points claimed the win.

To capture this action, we used a Phantom Flex 4k, Sony F55, Gopro 4, Canon 5D Mark 3. We did however have some location power challenges. We overcame them with some quick thinking and lots of stingers (extension cord)! We got to see sandwiches explode when you fire a weapon at them. It quite spectacular to watch.

Most of the gamers had never fired a gun before in real life at all so it was really interesting to see those individuals fire a weapon for the first time. One player in particular stepped up to the range and aimed down the sights; He fired at the sandwich and hit right into the block of wood underneath it sending the sandwich flying into the air perfectly in tack! Using the Phantom Flex 4k we re-watched the hit in slow motion and you can see the sandwich almost floating in the air!