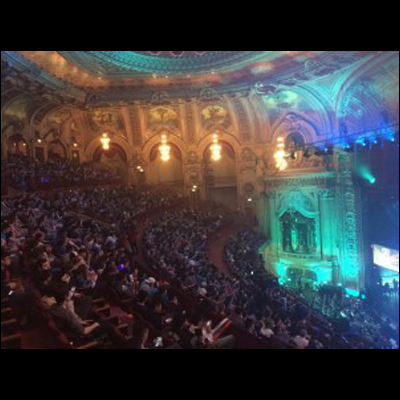 Chicago Cameraman at League of Legends for theScore

Since it first started to gain popularity with a mainstream audience a few years ago, Go To Team has been on the cutting edge of eSports video content. We’ve traveled all over the world – as far as Australia – to shoot some great features and promos for eSports networks.

The latest assignment had me in my own backyard in downtown Chicago at the historic Chicago Theatre. The League of Legends World Championship Quarterfinals were taking place there. The top eight League of Legends teams from around the world, including Korea, China, Europe and North America were there to fight for a spot in the Semifinals in New York City. I was on-hand to capture the excitement for theScore eSports!

There were four nights of action with one matchup per night, and each night I captured some great B-roll of the teams, fans and the beautiful theater. When the matches were finished we set up some lights and got one-on-one interviews with a player or two from each team. The most interesting thing about this shoot was that it was one of the first times I’ve dealt with primarily international interviewees. As a result, a translator was often needed to translate the interview questions and answers in either Korean or Chinese. The dynamic for this was a cool thing to learn how to manage on set. The translator was given a mic and then stood off camera to translate. The audio from the interview would be immediately emailed to theScore editors who would transcribe and subtitle the interview before it would be uploaded to YouTube.
For this shoot we had an editor on-site who cut and uploaded interviews as they happened. This ensured that theScore would be able to provide the content their fans were wanting to see ASAP before the next round of games began the following day. Shooting for theScore at the League of Legends World Championships was truly a new and unique experience!