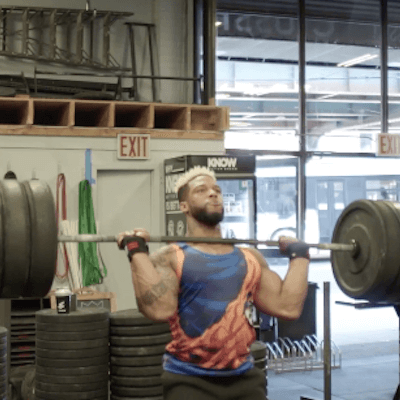 “You have to keep the bar raised.” – Terron Beckham

He may be talking about a symbolic bar, but he keeps other bars raised as well. CBS Sports wanted to highlight his incredible athleticism and our New York camera crew was able to go behind the scenes.

Your first reaction when you see someone like Terron Beckham is, “Wow is this guy human!?” Terron is the cousin of New York Giants NFL player, Odell Beckham Jr. And he is made of 99% muscle. CBS Sports went to the gym with him to watch his “average” CrossFit workout. He is an athlete who you would want on your team, whether it be for the NFL, WWE, CrossFit or American Ninja Warrior – all of which he has tried out for by the way.

Talk about gym inspo! Thank you for the workout Terron and thank you for a great time CBS Sports.

Need gym inspo too? Watch below.