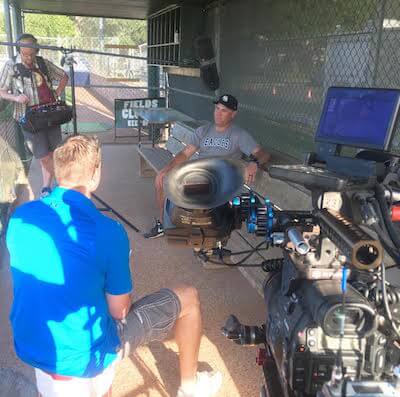 Posted 11 May in Texas Video Crew by Kristie Wakefield 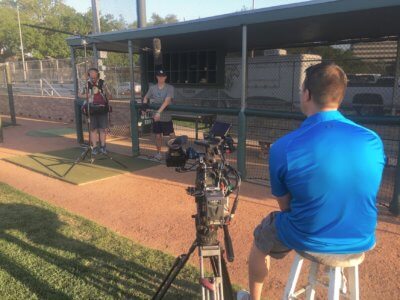 On a beautiful 80 degree Texas day, GTT DP Roger Woodruff and I drove out to a Houston-area high school, Second Baptist, to cover a story on Jackson Ryan for CBS Sports Interactive. His grandpa is Nolan Ryan, whose 27-year major league career netted a record-setting 5,714 strikeouts. Ryan is heir to baseball royalty. So, of course, he plays baseball and, also of course, he’s a pitcher. But, Ryan was born with cerebral palsy. Despite not having control over the right side of his body, he helps the Second Baptist Eagles deliver strikes as a relief pitcher.

We spent the afternoon at an atypical high school baseball practice. Not only were we working with Ryan, but two of his coaches are former world series champs (among a ton of other MLB accolades), Andy Pettite and Lance Berkman! Really! 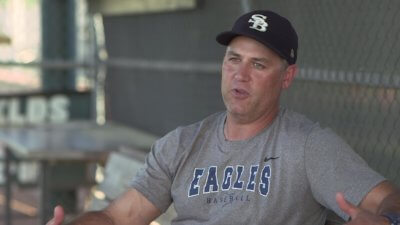 What a beautiful day to be on the diamond. I only played baseball during elementary school but there’s something special about being on the field. I rigged Ryan with a lav and gathered nat sound with the boom mic. Roggg rocked the C300 utilizing the 70-200mm and 24-70mm to get the B-roll coverage he needed. We set up the 6×6 scrim to stop down the sun as we set up for interviews with Ryan and Berkman in the dugout. With the 85mm, Roggg got some beautiful hero shots of Ryan as the sun was setting. We also busted out the MYT slider and used the 16-35mm to capture him delivering pitches. It was a real honor to be in everyone’s presence. Ryan is an insanely hard worker and has zero excuses. I think he’d be a good fit at Go To Team!