Road trips can be really fun — But what if you got to travel with one of the biggest sports networks in America? 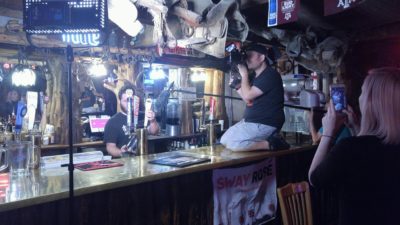 When we get a chance to hit the road for a great client like CBS Sports, naturally we are really excited about the opportunity.  Over the course of two months, our Texas DP, Roger Woodruff, traveled to five SEC schools for CBS Sports, and the results were really awesome! “In a lot of ways it felt like I was shooting for a hybrid Travel Channel/Food Network type show.  I thought that was pretty cool. It was a ton of fun.” – Roger

One of the best things about this shoot was the gear we got to work with.  Roger, was rocking a Canon C300 Mrk2 with a bunch of cool lenses, like the 50mm f1.2 and the 85mm f1.2.  He was also piloting a DJI Mavic 2 Pro for some drone shots of various college football stadiums, and working with the new DJI Ronin – S.  “I just loved working with both of these new DJI products and I’m so excited to have them in my kit. Both of these tools are a game changer,” Roger said.

The DJI Mavic 2 Pro is a huge step up from the GoPro Karma, and our crew l loved working with the Ronin – S, especially considering what it was like working with the original Ronin.  (Spoiler Alert: It was heavy!) For this particular shoot series, we had a Canon 5D Mrk4 mounted to the Ronin – S with the 24-105mm. Yup, the Ronin – S can easily handle that weight. No sweat. 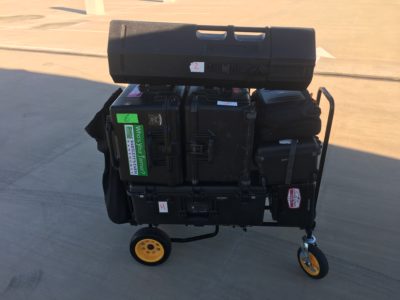 So now that you can picture all of this cool gear in your head, let’s talk about where all Roger went. He started his journey in College Station at Texas A&M, then drove to Oxford, Mississippi to capture the beauty of Ole Miss, then he caught a flight to Lexington to check out the University of Kentucky, caught another flight to Nashville, TN to marvel at Vanderbilt, and ended his journey with a nine-hour drive to Tuscaloosa to shoot at the University of Alabama. 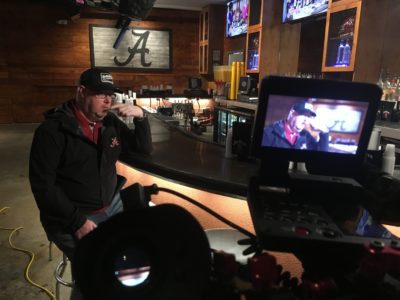 Although we were working with a lot of cool gear the shoots themselves had a simple structure.  Over the course of two days, we would shoot a ton of campus b-roll, mostly in slo-mo with the Ronin – S and then head to a “go to” bar and shoot fan interviews along with b-roll.  The next day was always spent at a popular restaurant where we would shoot an interview with someone who represented the establishment, followed by b-roll in the kitchen and dining area.  A lot of the footage was captured in slo-mo. Most of the time we would shoot at 120fps in 1080p on the C300 Mrk2. 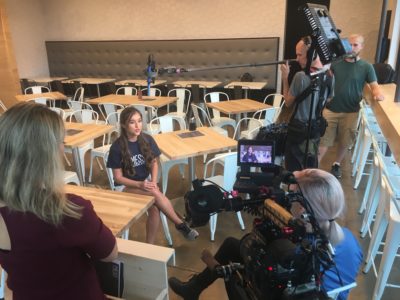 All of these shoots, with the exception of the University of Alabama Vignette, are available online to watch.  Be sure to check them out through the links below!