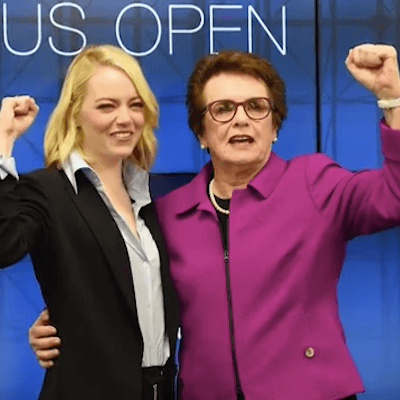 The movie “Battle of the Sexes” celebrates the 44th anniversary of the historic tennis match between Billie Jean King and Bobby Riggs that was both spectacle and sport and became a pivotal moment in the history of the women’s movement. Our Los Angeles camera crew was happy to hit the “green carpet” with CBS Sports to talk with the stars of the movie, Emma Stone, Steve Carell, and even Billie Jean King herself.

Billie Jean King dominated the tennis courts in the 60’s and 70’s. She won 39 Grand Slam titles, 20 Wimbledon championship titles, and most famously, she won the “Battle of the Sexes” match at 29 years old against 55-year-old Bobby Riggs. She founded the Women’s Tennis Association and Women’s Sports Foundation. King is regarded as one of the best tennis players in history, but almost more notably, she is a huge advocate for gender equality and social justice. That’s why they decided to highlight her fight for justice through a tennis match by making the movie, “Battle of the Sexes,” the match that is considered a milestone in the public acceptance of women’s tennis. She really used her platform for social change.

Emma Stone portrayed Billie Jean King in the film, “Battle of the Sexes.” She is an Oscar-winning actress who has starred in hit films like La La Land, Birdman, The Help and Easy A. For this role she put on 15 pounds of muscle working on her game, but more importantly, she got to work very closely with King to learn about her trials, tribulations, and successes firsthand. Stone was thrilled to meet King and learn that “even one voice can make a huge difference.” 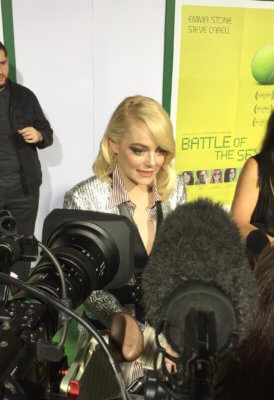 Names you know in women’s tennis now because of Billie Jean King: Serena Williams, Venus Williams, Maria Sharapova, Caroline Wozniacki, Victoria Azarenka, and more. Things women in tennis now have because of Billie Jean King: their own tour (the WTA Tour), equal winnings for the Grand Slams (as of 2007), and the largest payday of any player (man or woman). 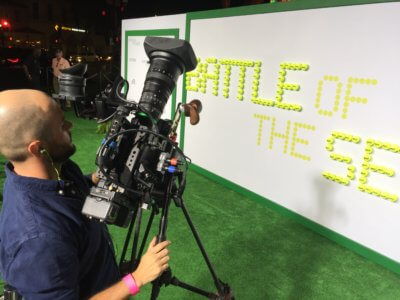 CBS Sports was helping to collect footage for the upcoming Billie Jean King biopic. Who better to highlight than a strong woman who fights for the rights of other women. Love and equality were themes of the premiere night. So happy to have been in on the action and appreciation.