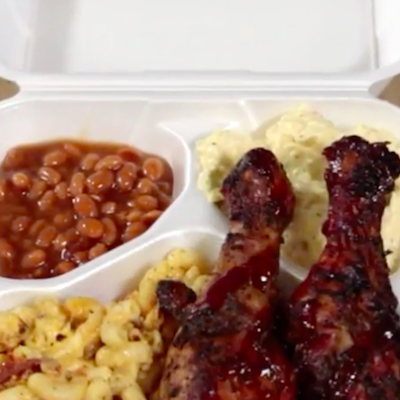 Our Los Angeles video camera crew, David Feeney Lance, headed to Compton with The Chew to learn what goes down in the innovative and tasty Trap Kitchen.

Straight Outta Compton with The Chew

Quality food coming “Straight Outta Compton” for this shoot. Trap Kitchen is a pop-up restaurant fueled by social media in south central Los Angeles. They were recently featured on ABC’s The Chew. The owners and operators Malachi “Spankihanas” and Roberto “Bad News” were once involved with rival gangs in Compton. Their passion for food brought them together. They were tired of the street life, so they decided to feed the streets instead. Now their trendy and delicious company is taking LA by storm.

Trap Kitchen Treats on The Chew

Our Los Angeles video camera crew went into their “Trap Kitchen” to see what their day to day looks like. They don’t have an actual brick and mortar shop – all business is done through Instagram. They have a quarter million followers! The day’s menu is posted to their page and by the afternoon they get all their orders to deliver or cater. They are best known for their soul food, BBQ, steak and lobster, and shrimp Hawaiian bowls. Who are some of their top name clients? Snoop Dogg, Kobe Bryant, Ice Cube, Anthony Anderson, Martha Stewart and more!

What else has Go To Team shot with our favorite foodie show, The Chew? Glad you asked. Dallas video camera crew recently headed to TGI Friday’s test kitchen to get a taste of ribs and potato skins. San Francisco video camera crew attended 2017’s Academy Awards with The Chew’s Carla Hall and muffins. New York video camera crew headed to Rhode Island to highlight the culinary culture in Newport and Providence. And our Los Angeles video camera crew also recently highlighted Common Threads, a non-profit that brings healthy cooking options to low-income children and their families.

Food always brings people together. We were glad it brought us together for this yummy shoot with The Chew. Be sure to check out the Trap Kitchen on Instagram!