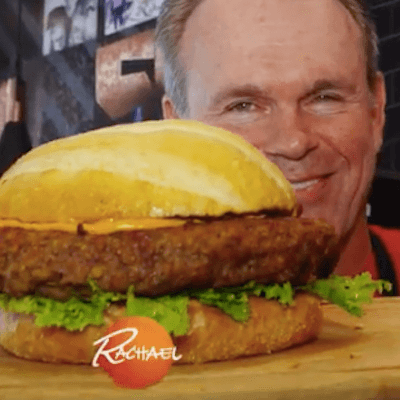 Who better to make a football-sized burger than former NFL inside linebacker John Offerdahl? Our Miami camera crew, Juan Lopez, was happy to join Rachael Ray as she learned how grill-master Offerdahl makes his monstrous burger.

What do you get when you mix a football-sized appetite and an affinity for grilling? A giant stuffed burger of course! John Offerdahl is the former inside linebacker for the Miami Dolphins. He’s been spending his retirement from the game grilling up good food at one of his many restaurants, Offerdahl’s Off The Grill.

Some of you may be asking what constitutes an Offerdahl original burger. The “Ultimate Stuffed Inside Line Burger” consists of two large patties stuffed with tortilla chips, ground chuck, pepper, salt, egg, cheese, tomato, onion, and black olives. Add lettuce, mustard, and finish it off with a big bun and you’ve got a burger fit for the NFL. 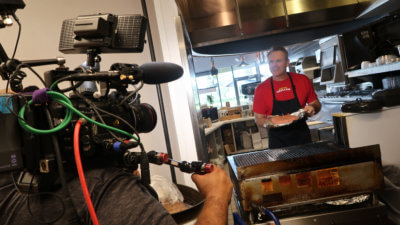 Southern Florida is now the home to many restaurants owned by the grilling-enthusiast and he has met a lot of success. So much so, Offerdahl decided to begin the Gridiron Grill-Off festival eight years ago. Food, wine, games, and of course grilling are the main attractions. Celebrity chefs and former NFL stars alike compete for the title of champion in both grilling and cornhole tournaments. All proceeds from the event benefit Offerdahl’s Hand-Off Foundation, which strives to “Feed the Need of Those in Crisis.” Over the years, he has raised over $400,000 towards his cause. That’s a touchdown in our book!

Rachael Ray asked Offerdahl, “Where do you get buns that big?” What we want to know is “Where did you get a heart that big?” Taking a passion for grilling, a passion for helping people, and turning that into a fun event everyone can participate in is something to applaud. We personally think his heart must be about the size of his burger (and his appetite!) 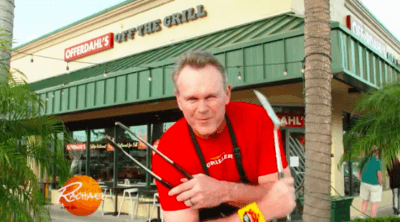 To watch how the ultimate burger is made for yourself, click here.