Saturday’s in the fall are made for one thing and one thing only: College. Football. 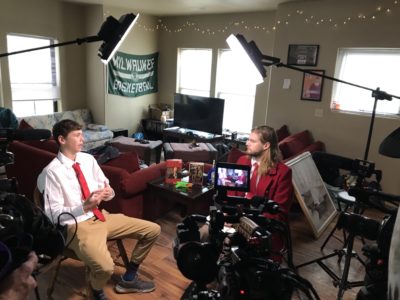 Barstool Sports College Football Show is the only show you need on Saturday morning. Every week, you’ll hear hosts Kayce Smith, Dave Portnoy, Big Cat, and Brandon Walker preview the biggest games of the day, hand out their gambling locks of the week, and announce their Top 10 Ratings for the week.

Barstool Sports invited Go To Team’s Chicago DP, Kyle Kaiser, to join them at the University of Iowa to film their weekly sports show. This episode focused on the doorman at fraternity tailgates, and specifically how he decides who exactly he’s going to let into the tailgate.

The first shoot day, our crew started out by gathering b-roll of the U of I campus, as well as, some shots of all of the fraternities in Iowa City. They spent the second shoot day consisted of a full day of footage at a fraternity tailgate. Our crews spent the day filming two sit-down interviews with the pledge doormen, b-roll of the tailgaters in action, some on-the-fly interviewers with the party-goers, walk and talk interviews with four senior fraternity members, a standup introduction to the package and of course, the doormen in action.

Kyle used a Canon C300 camera to capture the various shots of the day. Our crews didn’t have much time to set up for the three camera interview so Kyle used to Genaray LED panels and used battery to power them. After that everything was set on the shoulder with natural light.

Thank you to Barstool Sports for choosing to work with Go To Team’s Chicago camera crew on this piece! We look forward to scoring more touchdowns with your team in the future!