One of the most important conversations happening in business right now is regarding cybersecurity. Documents with sensitive information like passwords, financial details, and product plans. Thankfully, there are good guys in the fight.

CNBC was on site to cover HP’s new high-security printers, and our Texas video crew, Roger Woodruff and Kirby Clarke, were there to capture it all! 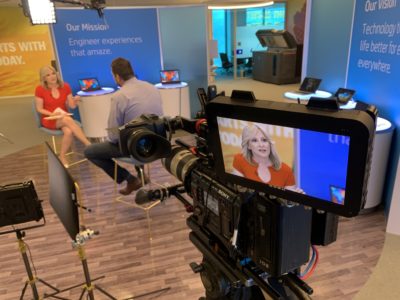 The piece covered the new high-tech security systems that go into HP’s printers and other devices that help keep sensitive information safe. HP found that the channel between computers and wireless printers can often be a strike point for people looking to get their hands on company documents and decided to focus on eliminating that risk for customers both in personal use and for business printing. CNBC went in-depth on how these new printing systems are improving digital security for customers.

The piece was shot using a combination of two Sony F5’s and a Sony A7II to capture multiple angles at once and ensure the best possible video quality. Lighting was provided through the previously installed lights inside and multiple Litepanels. They were supplemented with two Arri lights filling in where there were still shadows. The audio was captured by apprentice, Reinaldo Rondon.

Our crew had a great time shooting and learning about HP’s new security measures with CNBC, and we hope to work together again in the future!