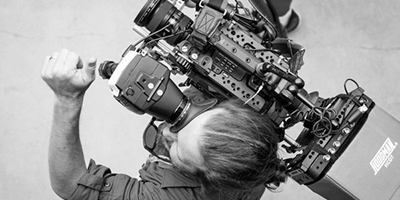 Senior Director of Photography, Dave Baker, is one of the best cameramen in the business. He’s seen it, shot it, traveled there and done that. What’s he doing when he’s not shooting?… he’s shooting.

Dave’s great do whatever it takes attitude, as well as creative insight, has made him one of the best DPs in the business. Super Bowl… done that! A network show… check. Live shots and features for Network News, Sports, and Entertainment… yeah. Agency and commercial shoots… yep. What hasn’t he done… been to the moon. Want to send him? He’ll shoot that, too. Dave’s work can be seen on your screen anywhere and for just about everyone. CBS, ABC, NBC, FOX, E!, Extra, Inside Edition, ESPN, Fox Sports, FS1, HBO Sports, etc.

Dave’s based in Charleston, South Carolina. He just lives there. Why not? It’s Charleston, the best city on the planet. Dave travels the Southeast daily. He’s often shooting in the Carolinas, Georgia, and Florida, but travels out regularly for major News and Sports Features.