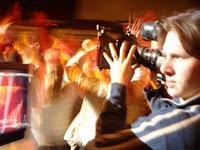 The North Charleston Convention Center is celebrating its 15th anniversary. To help commemorate the event it contracted Advertising Service Agency to produce a commercial starring North Charleston’s Mayor Keith Summey. Go To Team’s Tom Wells was hired as DP for the commercial. The spot was shot on the Panasonic Varicam and included over 100 extras, stunt crew, and a specially fabricated device that allowed the mayor to safely “crowd surf” above the cast of extras. “We had a great time shooting the spot,” said Tom. “Although the commercial has a really ‘big’ feel to it, we actually pulled it off with a relatively small crew. The response to the piece so far has been outstanding.” Check out the video below for a couple of behind the scenes clips.