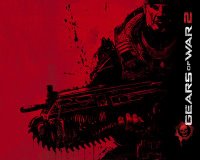 Go To Team‘s Raleigh NC cameraman Jimmy Hall headed over to Epic Games in Cary NC for an EFP shoot with Spike TV’s Gametrailers. The episode premiered on the eve of E3(which is a videogame trade show, think NAB but for gamers) and its main focus; Gears of War 2 the sequel to the brain bashing, Hammer of Dawn (no not Dawn Nelson our fabulous Production Coordinator) obliterating, explosive arrow to the face masterpiece Gears of War. Sorry, didn’t mean to geek out BUT myself along with a couple other GTTer’s spent a few hours in between our busy schedules unloading clips and lopping explosives at each other…needless to say I love the original and was pretty stoked to see behind the curtain of the soon to be released sequel.

Go here for some outtakes or checkout the episode below: