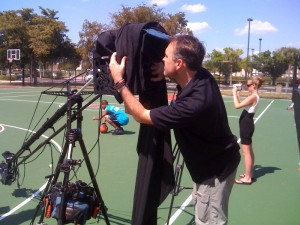 Go To Team’s Orlando DP, Dan Beckmann, traveled to Naples, Florida to shoot the “YouTube Slam Dunk” video with Team Flight Brothers.  Sponsored by the all new Nissan 370Z, and posting nearly 70,000 hits so far on YouTube, the video allows you to submit a 30 second audition video of your own material showcasing your best dunking abilities for a chance to win amazing prizes!
The Official Title of “Best Dunker On YouTube”
A trip to a Team Flight Brothers Event and the opportunity to perform as an honorary member
And Autographed stuff from Chris Bosh & Jalen Rose
Using the Go To team Micro Jib with an HVR Z1U, Beckmann was able to capture amazing shots in 1080i – from behind the glass of the backboard, to high angle shots above the rim!