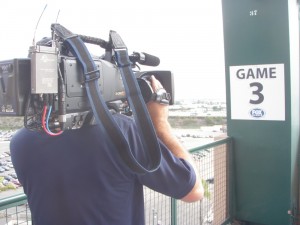 Go To Team’s Clark crew arrived in Los Angeles – Anaheim specifically – yesterday and got straight to work on Monday covering Game Three of the American League Championship Series.  Skip Clark and Dan Lowrey are there working for Fox Sports as Fox follows the MLB Post Season all the way through the World Series.  With no real prep day in Anaheim, Skip and Dan were busy picking up scenics and billboard shots around the stadium before the game, and then busy during the game looking for more highlight shots for the teases that will be edited for the rest of the ALCS.  Teamwork is the key, with Skip shooting as much as possible with his Varicam and Dan following behind with an HVX-200 equipped with a super wide stadium lens.  Today – Tuesday – will be more of the same with some player interviews added to the schedule.  Be sure to continue tuning in for more of the ALCS on Fox – the series has been a great one with two games going into extra innings and the Angels gaining some ground with Monday’s win.  The Yankees still lead with a 2-1 lead.