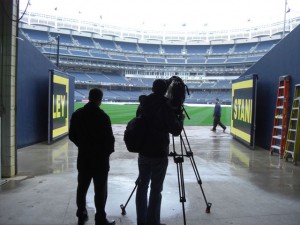 Rain.  That was the common theme Thursday.  It started around 9:30 Thursday morning just as Go To Team’s Clark crew was hitting the streets of New York to shoot scenics.  Skip & Dan are there with their Panasonic Varicam covering the American League Championship Series for Fox Sports.  But there wasn’t much to shoot around town with the constant rain, so they, along with producer Josh Oshinsky, headed for Yankee Stadium where they looked for all kinds of corners to shoot from.  Where can you see the trains from the stadium?  What are the angles in the ‘Great Hall?’  They were looking for all those shots getting footage ready for tonight’s opening game in the series.  Be sure to tune in on Fox when the Yankees and the Angels take the field!