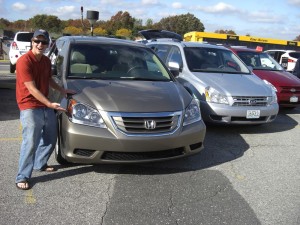 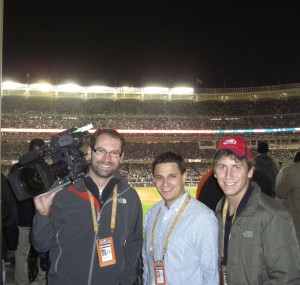 After nearly another week in New York, Go To Team’s Clark crew, along with producer Josh O’Shinsky, headed to Philadelphia for Games Three through Five of the World Series.  Skip Clark and Dan Lowrey (from Charlotte, NC, and Orlando, FL) have been covering the Major League Baseball post season for Fox Sports since October 14th!  And after Thursday’s Game Two in New York, there was a lot to get done.  Skip and Dan first had to make a stop at Hertz to pick up a new rental.  An upgrade!  They left the Kia that got them through so long in New York and picked up a Honda Odyssey.  Dan was excited.  Making the best of the three hour drive to Philadelphia, they shot footage of the drive on the Panasonic Varicam and a time lapse on the digital SLR.  All of that footage will be used for a feature in tonight’s (Saturday) Game Three.  Once they made it to Philadelphia it was time for more scenics for bump shots and features.  But there was  problem.  The intervalometer for the digital SLR broke and they wouldn’t be able to shoot anymore of the panning time lapses that have been popular this season.  Always looking for the solution, Skip and Dan made a last minute stop at a camera shop and picked up a remote shutter release.  No one had an intervalometer.  So that meant Skip and Dan became the intervalometer.  Using the stopwatches on their iPhones, they would click the remote every time they needed to take a shot.  The average time lapse runs between 1000 and 1400 frames!?  That’s a lot of button clicking!  They worked through Friday night shooting time lapses on the digital SLR and bump shots on the Varicam and everything is ready for tonight’s game.  Be sure to tune into Fox Sports for Game Three!

Dan - Excited About The New Van 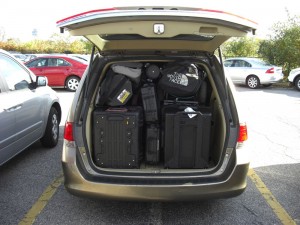 The Odyssey - All Loaded Up 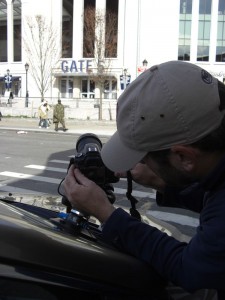 Rigging The SLR For The Driving Time Lapse 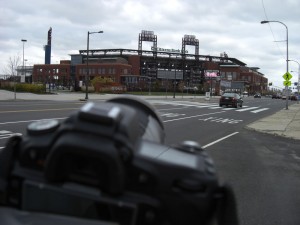 Wrapping Up The Time Lapse In Philly 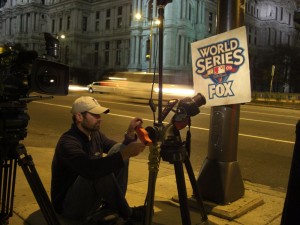 Clicking Away On The Time Lapse 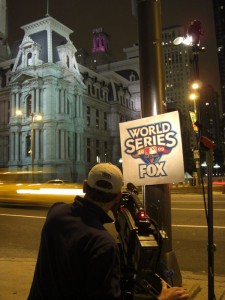 Bump Shots On The Varicam