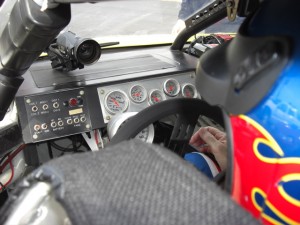 A big part of the Sprint Cup All Star Race for the last two years has been the Burn-Out competition.  Besides all the smoke and burned rubber, it’s also a lot of fun for the drivers and the fans.  But now that Fox Sports and Speed Channel talent are invited to compete, the drivers have been asked to give some lessons.  Go To Team’s Charlotte-based crew Skip Clark and Dan Lowrey were on hand while driver Greg Biffle tried to teach Speed talent Dave DeSpain.  The lesson went pretty well – at least from the perspective that no one was hurt and nothing was hit.  But Go To Team’s Panasonic AG-HSC1UP was a hit!  The small HD palm-sized camera records to SD cards and was the perfect size to fit inside the car for a two-shot of Greg & Dave.  While the crew recorded the two-way radio audio to the Varicam, the camera captured all the spinning hands and smoke that make a perfect burn-out.  And then after the lesson, they attached the camera right to the side of the car to shoot the spinning tires and get close to all the smoking action! 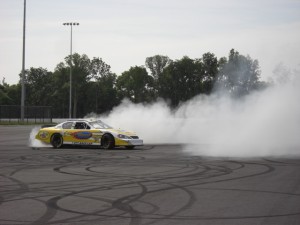 Who Doesn't Love A Good Donut?!

Attached Right To The Windshield 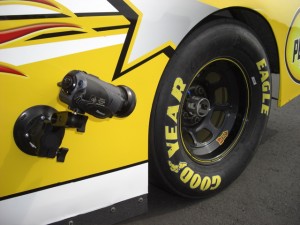 This Suction Cup Has Been Up To 110mph!