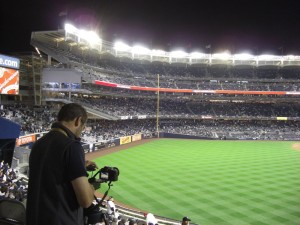 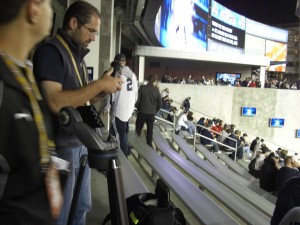 Setting Up The Rig

Game One of the World Series is in the books: Phillies 6, Yankees 1.  But it’s already Day Fifteen for Go To Team’s Clark crew.  Charlotte, NC, based Skip Clark and Orlando, FL, based Dan Lowrey have been following the Major League Baseball post season since October 14th when they started with the American League Championship Series.  They’ve been working for Fox Sports shooting elements for the pregame show and the game broadcast.  A big part of that is shooting beauty shots that get used for the billboards.  Fox Sports loves time lapsed shots for billboards, but they wanted to take it another level.  So Skip has been using a digital SLR and a motorized telescope tripod to add that extra little bit.  Once Skip and Dan find the spot they set up the camera to shoot at just the right interval and then set the rig to pan at any speed.  Normally the time lapsed shot takes about a half hour and the shot is good for 40 seconds of air time without seeing any stuttering in the shot.  After that, it’s a simple process using a photo program and Quicktime to stitch it all together!  And the best part is that once the rig is running on its own, Skip can use his Panasonic Varicam to shoot other shots in the same spot!  They’ve also been able to use the digital SLR when using the Varicam might have been a little more impractical – like attaching it to the side and top of a taxi cab?!  The city passing by the cab made for a great shot.  Be sure to tune into Fox Sports tonight for Game Two of the World Series and all those time lapse shots! 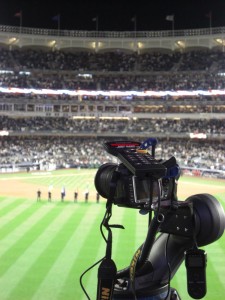 Check out the videos here!