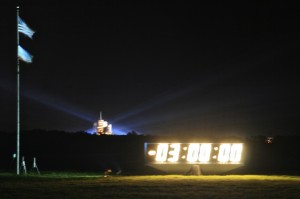 Go To Team and Space Flight now take to web – and GO Global!

The space shuttle Endeavour sat stranded on the launch Pad, waiting.  Waiting for its ride to the International Space Station.   Waiting to attach an experimental platform to a Japanese research module.  And waiting for a line of thunderstorms to pass over the Cape.  After a lengthy 3-hour weather delay, fueling of the shuttle’s external fuel tank began.  But shortly after tanking got underway, a presumably repaired hydrogen vent line was found, once again, to be leaking potentially dangerous gaseous vapor.  The mission was scrubbed, but Go To Team and Space Flight Now was just getting to work!

For 3 days, Go To Team’s Partner/Director of Photography, Dan Beckmann, took the helm as technical director and production manger for Space Flight Now’s live web streaming coverage of the launch.  Although, the mission scrubbed twice, GTT was there, in their make-shift-outdoor studio, to capture all the action!

Using a Video Switcher, wireless IFB units, SKYPKE via laptop computer terminals, various HMI and ARRI lighting packages, and multiple HVR Z1U cameras, GTT was able to broadcast live – via the web – as all the drama unfolded.  News anchors David Waters and Miles O’Brien were their to take viewers along for the ride.  With nearly 200,000 hits for Space Flight Now, bloggers and SKYPE users from across the planet – from Australia to New Jersey – were following along, as Miles and David explained the breaking news in detail. 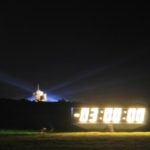