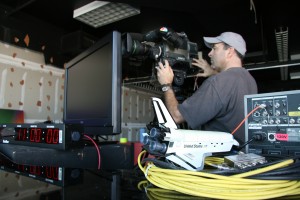 Go To Team Cameraman at the launch of Space Shuttle Atlantis

Covering the launch live, with NBC News correspondent, Jay Barbree, the Atlantis crew of 7 took off for an 11day mission to make repairs to Hubble. Beckmann has served in the NBC News Studio for countless launches and always works with Barbree to ensure the highest level of production. While mission critical to NBC’s live coverage Beckmann and Barbree have a slightly less diffcult task than the astronauts they cover!

Since 1990, Hubble has been capturing images never before seen by the human eye.  Some of Hubble’s greatest discoveries: determining the age of the universe (13.7 billion years); discovering that all major galaxies have black holes at their center; discovering that the process of planetary formation is relatively common; and detecting the first ever organic molecule in the atmosphere of a planet orbiting another star.

Hubble has been “looking” at images more than 12 billion light years away.  This latest repair mission will expand the operational life span of Hubble through at least 2014.