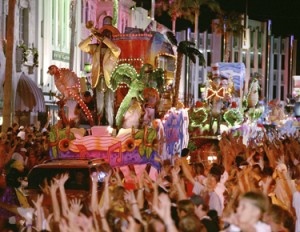 It was Fat Tuesday every Friday night for Go To Team in Orlando, Florida.  Each week Diector of Photography, Dan Beckmann, helped Universal Studios celebrate Mardi Gras.  The parade, complete with stilt walkers, floats, and hundreds of thousands of beads, wound its way through the streets of Universal Studios Resort.  Go To Team helped document the parade for each of the local Orlando TV stations, as their respective anchors played host as the parades Grand Marshall!