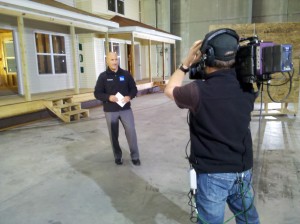 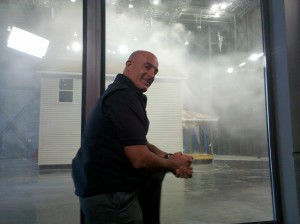 What would bring Jim Cantore and Go To Team’s Charleston based Baker crew to Chester County, SC?  The Institute for Business and Home Safety (IBHS) has built a Wind Tunnel…a big Wind Tunnel…21,000 square feet big…Why?  To Blow a house down!  Literally.  The wind tunnel is built to simulate any number of specific hurricane environments.

Jim Cantore was there to study the effects of these man made winds on re-enforced homes versus non re-enforced homes. Cantore reported live on both the Weather Channel and MSNBC from inside the tunnel during IBHS’s preparations courtesy of GTT’s Sony F900 HDcam and an SD/SDI Miranda box beneath the lovely Daylight tones of Bron Kobolds.

When the tunnel was ready, everyone was moved to an observation room and the giant banks of wind turbines were fired up and the rain was que’ed.  the Non re-enforced home was blown to pieces.  Thankfully none of Go To Team’s gear was left behind in the tunnel.  Those Bron Kobold HMI’s may be waterproof, but 100mph winds may have proved just  a bit too much! 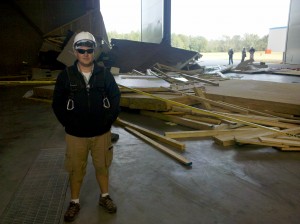 Non re-enforced house after the storm