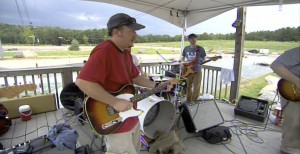 Charleston Crew gets in tune with Southern Fried Musicians Association

Have you ever wondered what Hillbilly Voodoo Music is? If you have all you need to do is catch a show of Statesville’s own Southern Fried Musicians Association. This band has a totally unique sound. Think rockabilly fused with blues. Dave Baker and Roger Woodruff caught up with the band over at the Nation Whitewater Rafting Center. It was there that the band was playing at the center’s annual River Jam. Before the show we got to chat it up with lead singer, Eric Hartness and drummer, Dale Beatty. Dale, a double amputee has never let his injuries stop him from rocking out.

Unfortunately the concert was cut short due to a crazy thunderstorm but GTT still walked away with some killer interviews and b-roll. I’d call that a success even if we did pack it up in the rain!