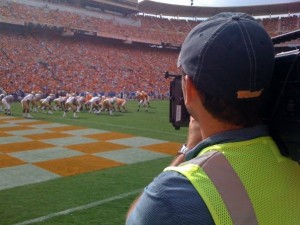 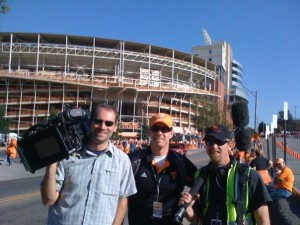 Go To Team’s Skip Clark spent much of the 2009 college football season in Knoxville, Tennessee, with the UT Volunteers.  A pretty easy gig for a guy who loves football!  The University Of Tennessee brought Skip on to gather footage throughout their season that would be used for marketing and PR campaigns as well as the new jumbotron at Neyland Stadium.  Clark and the entire team of crews – as many as four crews per game – started before sunrise on Saturdays and would work through the entire day, often long after the last tailgater left.  They spent time with the concession guys pouring ice into the coolers in the stadium, followed the students as they raised the flags around the stadium at sunrise, hung out with the tailgaters before the game, and marched with the band during the Vol Walk and in the “Power T!”  Oh – and after all that, they still shot all the best plays from the sidelines and then wrapped the games in the locker room with the team.  And every week it was something different!  With the creative crew at the University of Tennessee there weren’t any rules.  Skip and the entire crew of DPs and shooters could try out just about anything.  Skip used everything from his Panasonic Varicam to the Go To Team F-900.  Even his old Nikon Super 8 camera got used throughout the season!

Oh – and did we mention the day they covered the “Vol Navy?”  Every week dozens of boats – filled with a different kind of tailgater – arrive at the stadium via the Tennessee River.  Of course, the crew just had to find the best boat of “sail-gaters” to follow down the river!  College football recruits love college girls!  The 2010 college football can’t get here soon enough!

Sail-Gating On The Best Boat On The Tennessee River 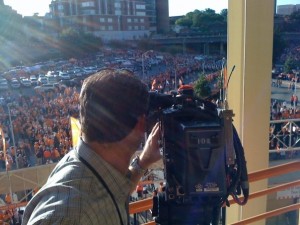