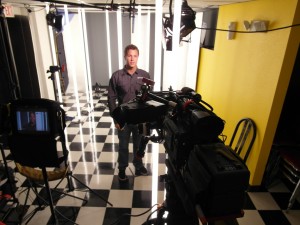 Clark Crew Interviews The Newest Kid In The NASCAR Garage 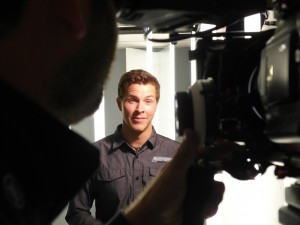 Trevor Bayne won the 2011 Daytona 500.  Don’t feel bad if you don’t know who that is, very few people did.  So Fox Sports, as part of their NASCAR coverage, wanted to bring everyone up to speed.  The producers wanted to show how this new young driver was just coming into the light.  Careful to not make the feature too literal, Go To Team’s Skip Clark came up with a different idea.  Skip started by making the trip to the hardware store for all of the supplies – 8 foot fluorescent light fixtures, a lot of fluorescent bulbs, some 4X8 sheets of insulation, and a bunch of supplies.  After that, it was time to head back to the track and build the set. 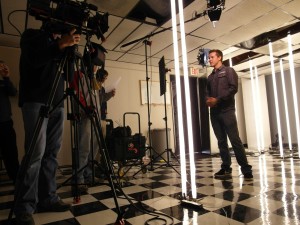 Skip and JP Biciunas, based in Charlotte, NC, took the shop fixtures apart by removing the ballasts and the lamp spigots.  With some rewiring they were able to take the lamps and stand them on end to create a background with all the lights.  The insulation, with the silver side out, covered up the walls in the room and added another layer of light.  They also used a couple of the fluorescent lights in the foreground for something to play off of.  With the color difference between the fluorescent lighting and the tungsten that Skip was using for the key, the scene had a bit of a cool look to it and the editor was able to play that up in post.  And with Go To Team’s new Arri Ultra Primes package paired with the Sony F3, it was easy for Skip to utilize all the depth that the set created.  The final piece aired in the Phoenix pre-race show on Fox.  Be sure to stay tuned throughout the Fox Sports broadcast season for more!