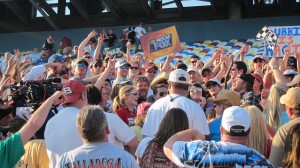 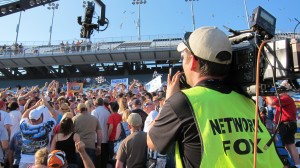 Tom Shoots Long Lens From Below

It was a bit of a scramble, but the guys pulled it off.  NASCAR on Fox has a new theme song for the open each week; country music star Dierks Bentley sings a special version of his song ‘Sideways.’  So, along with historical footage and highlights from each week’s race, the open needs some shots of Dierks performing his song.  Go To Team’s Skip Clark and Tom Wells were there for the shoot.  Fox scheduled the shoot following the race on Saturday afternoon so there wasn’t a lot of time for set-up.  The guys got everything in place and as soon as the checkered flag waved, they started moving everything into place.  While the producers gathered up fans, Tom came in with his Varicam, Skip came in with the new Sony F3, the jib and his assistant moved the jib into position, and Roger Woodruff, Kevin Juston, and JP Biciunas got the speakers, sound system, and video village set up.  All in just a few minutes!  As soon as the fans were ready and Bentley was in position – right in the middle of the crowd – it was time to make TV!  Bentley ran through the song several times as the guys shot the performance from every angle.  Tom’s Varicam brought a snappy look while Skip’s F3 and Go To Team’s new Arri Ultra Primes delivered the cinema look.  And the jib was there to show the expanse of the crowd.  You can see the footage every week at the start of the NASCAR On Fox broadcast! 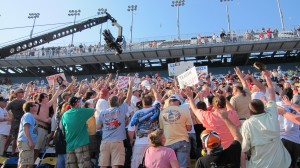 The Jib Sweeps Over The Crowd

We Promise - Skip's In There Somewhere With The F3