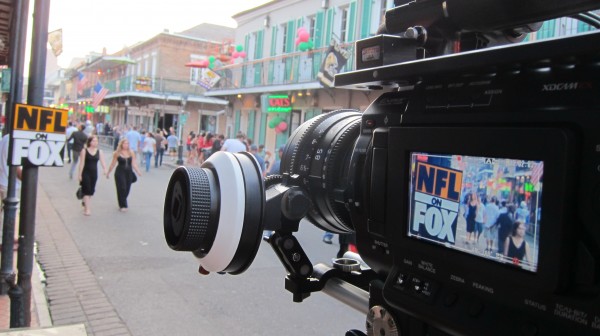 It’s been a busy football season for Go To Team’s Skip Clark.  He’s been traveling almost every weekend to a different NFL city to shoot scenics and football games for the Fox Sports NFL Pre-Game show.  With his Sony F3 rigged to what’s really just a telescope tripod head, Skip’s been shooting panning time lapses in cities all across the NFC.  He was in New Orleans earlier this season and that, of course, meant a stop on Bourbon Street!  But you gotta be smart if you’re shooting on one of the country’s most boisterous streets – you have to be prepared to frame out all the craziness.  Skip turned to what’s really one of his favorite lenses in his Arri Ultra Primes kit, the 85mm.  It allowed him to shoot long lens and keep the background very out of focus while at the same time minimizing just how much background there really was.  You could still see movement, but you couldn’t make out much detail.  You know, like all the beer, hurricane drinks, beads, and everything else you think about when you think about Bourbon Street! 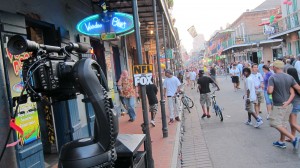