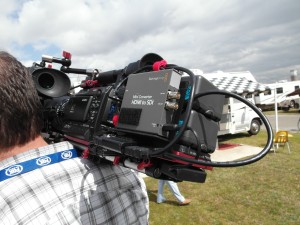 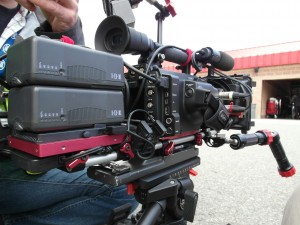 On The High Hat

Go To Team has been shooting with the new Sony F3 for several months now and it’s brought some awesome images to the Fox Sports broadcasts.  The camera and Go To Team’s new set of Arri Ultra Primes have really opened up the creative door for Los Angeles based Skip Clark.  But there’s an unsung hero in all of this – the camera rig that puts all that gear together.  Because the Sony F3 is such a small camera, just like the Panasonic AF-100 and the Canon 7D, hoisting it up for shooting can be difficult without the right tools.  Skip put together parts from a few different manufacturers to get the rig just right.

Starting at the base of the rig, there’s the Zacuto universal baseplate and rods.  From here everything else attaches and is adjustable for fit, comfort, and accessories.  The camera attaches to the baseplate and can be adjusted up and down as well as left and right so that the lens fits into the mattebox.  And while we’re there, Skip is using Chrosziel’s new Academy Mattebox.  With three filter trays and its small size it was the perfect mattebox for the rig.  Fitted with the lens is Arri’s new MFF follow-focus system.  And under the lens, supporting the weight at the front of the rig is O’Connor’s new O-Grip system.  Skip is using one O-Grip on the left and two on the right.  The grips attach to O’Connor’s rail guide and once they’re tight they can easily support the weight of the entire rig; they are incredibly strong.  Moving to the back of the rig, there’s all the counterweight: batteries and some video conversion adaptors.  All of this gear is mounted to the rig using Zacuto’s Red Plate accessory.  There’s a place to screw in the IDX battery plate and a wireless plate for the video conversion gear.  The video conversion gear is something that’s a little unique and was probably the one part of the rig that was a bit of a surprise.  The Sony F3 can only output to the HDMI or the HDSDI, not both.  And since Skip is using the HDMI output for the viewfinder, which we’ll come back to, there has to be some way to get an output for the client monitor.  The Black Magic HDMI to HDSDI convertor paired with SmallHD’s HDMI splitter provides the solution.  And all that’s left is the viewfinder.  Until Zacuto’s new EVF comes out, Skip is using the Cineroid viewfinder attached to the camera using a Zacuto arm.

The Black Magic Box Attached At The Rear

Skip’s been traveling on the NASCAR circuit for a month or so and it’s been the perfect opportunity to get the whole system vetted for ENG and studio at the same time.  Skip and his camera assistant JP Biciunas, based in Charlotte, NC, will spend part of their day in the garage following drivers and then head inside for interviews.  With all that Skip has combined into one compact rig, that transition is just like using a full body camera like the Panasonic Varicam or Sony F-900.

Be sure to catch the Fox Sports NASCAR On Fox pre-race show to see the F3 in action! 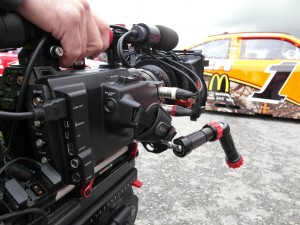 Shooting On The Tripod 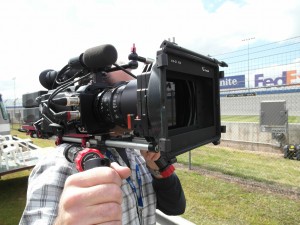 Shooting From The Shoulder With The Arri 180mm