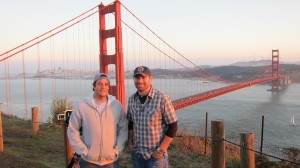 Some cities can present a challenge for scenics – not every city has a great list of iconic shots that immediately identify it.  But some cities, like New York and Chicago, have a skyline and vistas that everyone can recognize.  And you can add San Francisco to that list.  Go To Team’s Skip Clark, based in Los Angeles, CA, was just there along with apprentice Ryan Ricker shooting scenics for Fox Sports and they made quick work of getting around the city for some of its most recognizable spots: the Golden Gate Bridge, Fisherman’s Wharf, Lombard Street, and a cable car stop.  Lensing everything with his Sony F3 and Go To Team’s set of Arri Ultra Primes Skip also used a motion rig for time lapses.  Of course, a crew has to eat along the way – right?  And Fisherman’s Wharf is one of Skip’s favorite spots.  It might be a tourist trap, but who cares when they’re breaking up crabs right there for some of the freshest crab you can get?!  And then there’s the clam chowder topped off with the prerequisite Tabasco sauce!  It’s a good thing that there so many spots around San Francisco to shoot otherwise Skip and Ryan would have left weighing in a bit heavier!