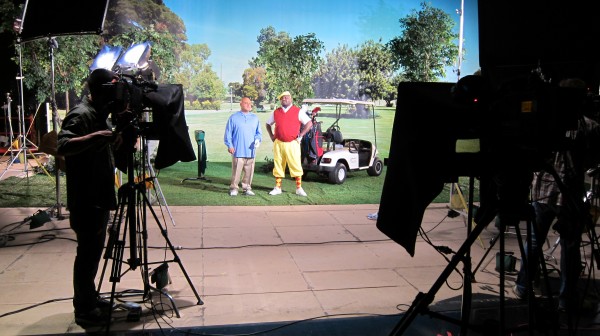 The laughs are sure to come if you’re shooting with comic impersonator Frank Caliendo.  Go To Team’s Skip Clark has been working with Frank nearly every week this year as he DPs the ‘Frank’s Picks’ segment for Fox’s NFL pre-game show.  Every week Frank picks a new character to play as he cracks jokes about the NFL and throws a few jabs at Fox’s own NFL talent.  Recently, Frank was playing Charles Barkley along with Aries Spears playing Shaq and the schtick was the Charles & Shaq show; modeled after a popular NBA show.  But since it’s a different character every week, Skip uses a different set of gear every week.  Sometimes it’s the Sony F3 and others it’s the Panasonic Varicam.  And even still, it could also be the Canon 5D MkII.  The right tool for the right job.  And for that reason, Skip used the Varicam, three of them actually, for the Charles & Shaq show feature, as ENG glass is most similar to live TV shows. 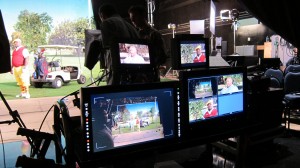