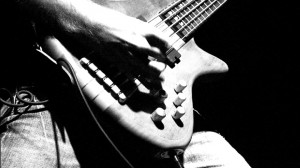 The Band SO Stereo produces Music Video from live performance

Go To Team is well versed in production. While our broadcast and commercial work has received lots of attention, it would be foolish not to give some respect to the versatility of our team when it comes to other productions.

Recently Go To Team’s Director of Photography Skip Clark’s EFP crew was called to shoot a music video for the up and coming indy rock band SO Stereo. Skip’s weapon of choice: The Panasonic Varicam. By taking advantage of the Varicam’s ability to shoot at different frame rates, Skip was able give the footage a grainy film look that complimented the edgy style of the music.

When it came to post production we decided to follow Skip’s lead by desaturating the entire video. The resulting black and white image brought out the grain in the video and truly gave it the rough indy feel that the client wanted. Once we had the right look it was time to start cutting.

Skip’s talent for shooting lends itself to editing. He knows what an editor wants. There were lots of close-ups and wide shots and even shots from the crowd floor. Perhaps the only challenge was cutting together one video with multiple angles when only one camera was used. Fortunately Skip was hired to shoot the entire show. By editing in shots from other songs we were able to incorporate multiple angles into the video. The end result was a great looking video that was shot and edited for less than 5k and still looked like a high-end multicam shoot. Check out the clip on You Tube and let us know what you think in the comments.