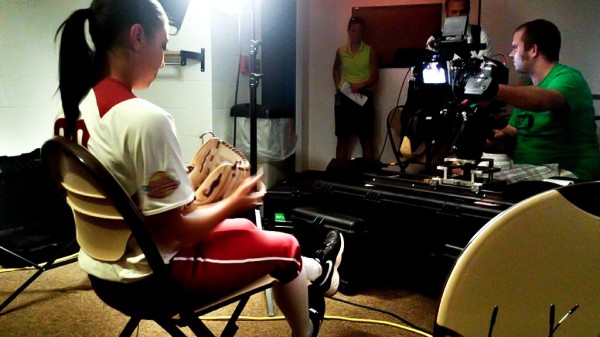 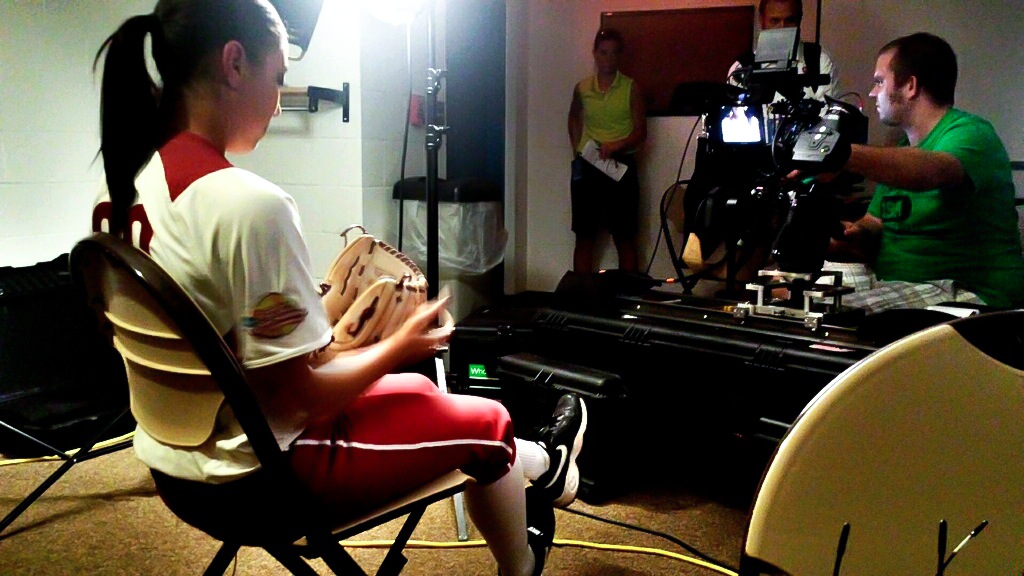 Here’s my audio guy’s point of view. I look pretty pretty focused on the monitor.

Every year Oklahoma City hosts the Women’s College World Series, the pinnacle of college softball competition.  A couple years ago I was here for ESPN shooting on a Varicam.  However, this year I was with Turner Sports DP’ing features for NCAA.com on a Canon C300.

I was pretty pumped about this setup as we drove up from Dallas.  The producers were looking for a very specific look.  Weeks in advanced they had sent me examples of interviews that they wanted to base their “look” off of.  No problem.  Challenge accepted.

Actually, the “look” they wanted was pretty simple at first glance.  The subject was lit with a Rembrandt style of lighting and the background was blobs of light.  The rest of the background was pitch black.  Once we got to the American Softball Association Stadium complex we got to work.

In this panorama you can get a better idea of our setup.

We were given access to the Umpire’s room for the day.  It was a pretty big room.  (Thank goodness)  I had my audio guy start hanging black fabric against the walls that would be our background.  While he did that I built the C300 and attached a L-Series 85mm prime f1.2 or “Big Mama” as I like to call her.  The next step was getting the C300 on the MYT Slider.  Then I lit for my subject.  I used a 400w Kino Flo as my key and 200 Kino Flo for a fill, but it was barely kicking any light out as we were going for a very dramatic look.  In retrospect I probably could have used a bounce but I always like having my Kinos on hand because they are very easy to adjust.  Lastly, the backlight was an Arri 150w.  The setup was lit at a 3.2k color balance.  Now it was time for the fun part. (Actually every element of what we do is super fun.)

To give the image those “blobs of light” in the background I purchased a strand of 25 outdoor clear light bulbs.  I hung them on my curtain rod and placed it a couple feet away from my black backdrop.  Once the background lights were in the ballpark I was able to figure out my camera move on the slider and adjust the lights accordingly.  To add a bit more texture to the lights I added a couple quarter and half CTB gels with clothespins.  This also helped to cool the lights down a bit since I had them on a dimmer. 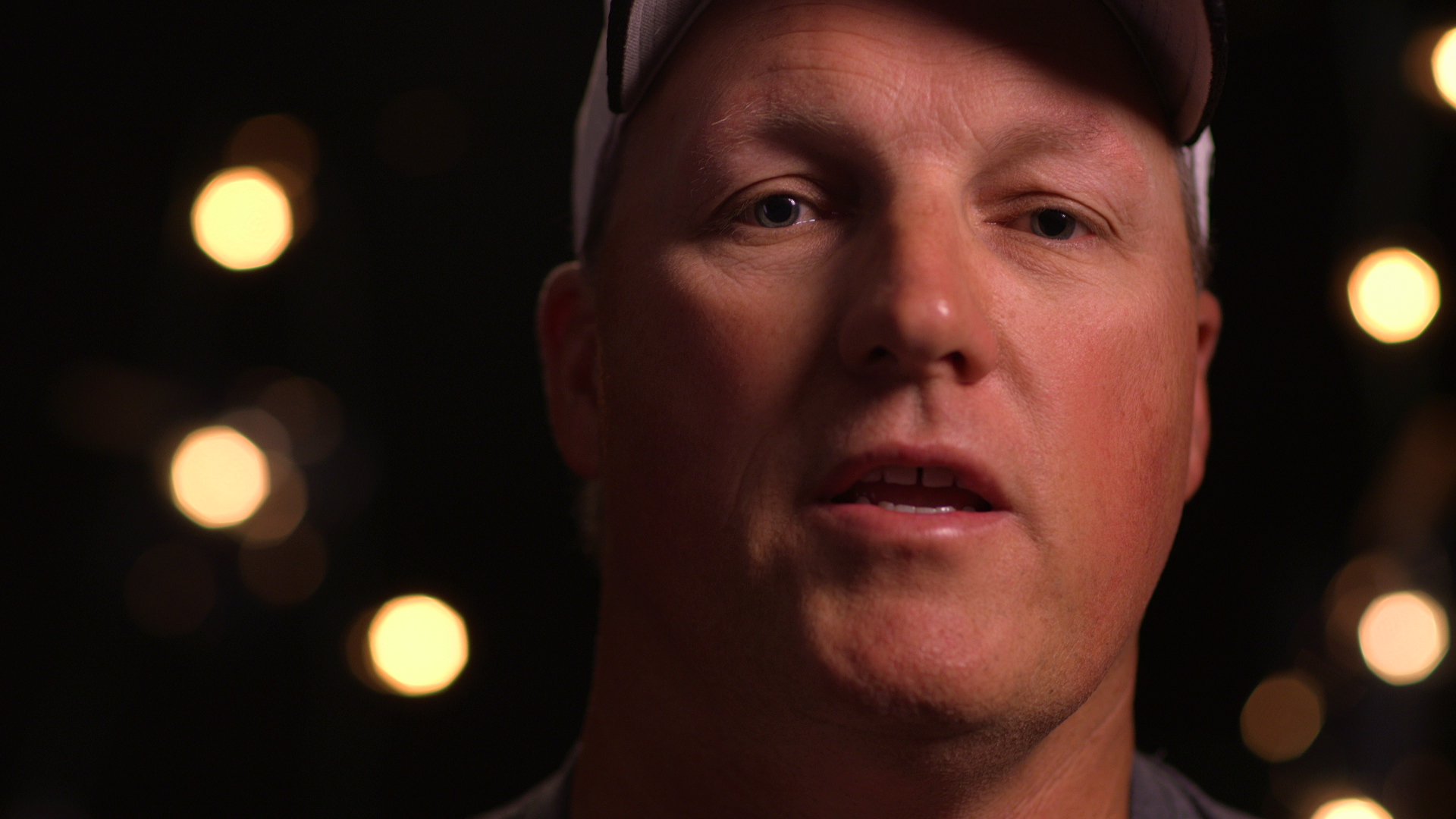 Here’s a screen grab from the interview with Baylor head coach, Glenn Moore.

The last step in perfecting this look was finding the right aperture.   I needed an aperture that was going to give me the best chance of keeping my subject in focus as I moved the slider but also made sure those bulbs were blobs of light.  I settled on f2.2.  If I wasn’t on a slider I could have opened it up a bit more but I thought this worked nicely.

The next day was media day at the park.  Within about eight hours we had 32 people, athletes and coaches, sit down with us in the Umpire room.  The day went really smoothly.  Everyone seemed really happy with the results of our setup.  After an exhausting day it was time to pack up and head back to Dallas.  Can’t wait for the next one! 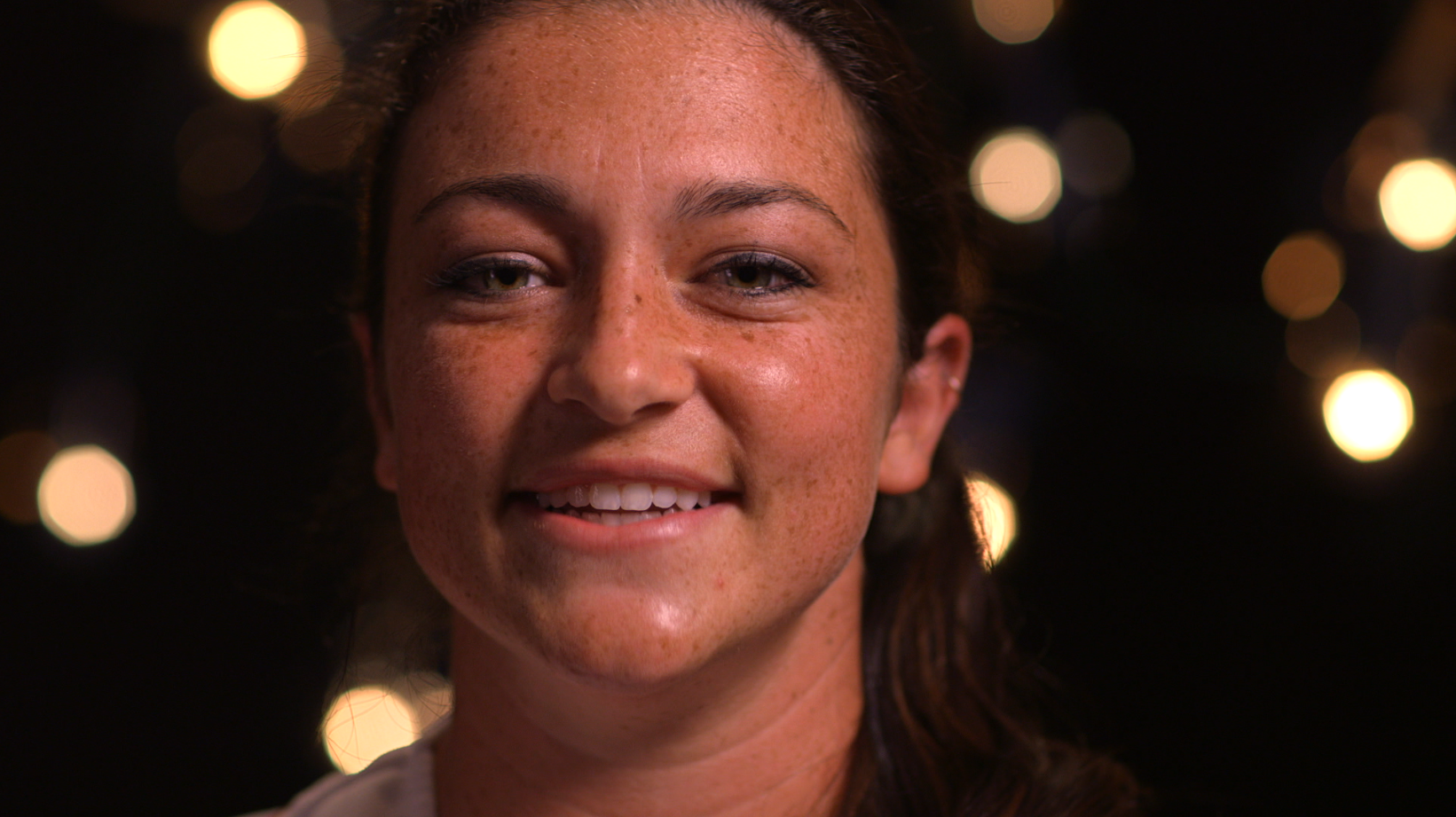 Alabama Infielder, Ryan Iamurri, durring her interview. She was a delight to listen to. 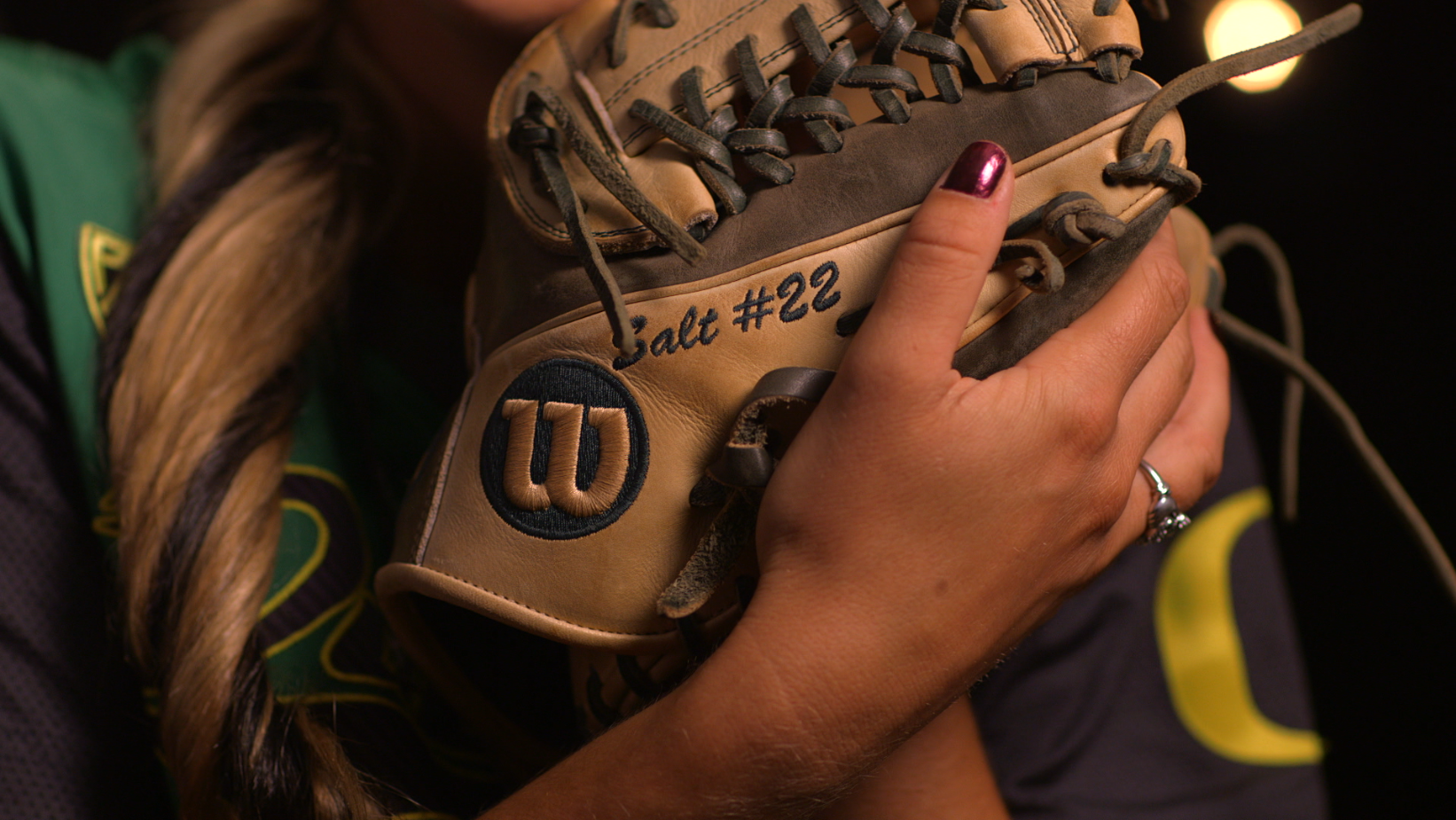 We also shot some cool cutaway shots of the players with their gloves.