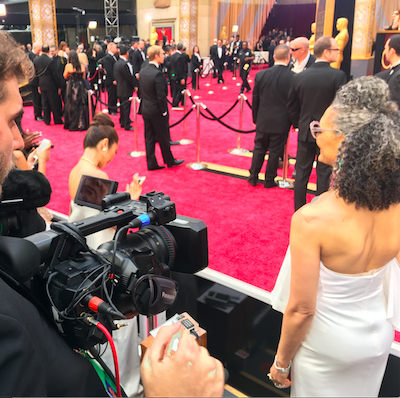 Our San Francisco video crew, Zach Reed, catches the reactions of celebrities when The Chew hands out muffins on the Red Carpet of the 2017 Oscars. 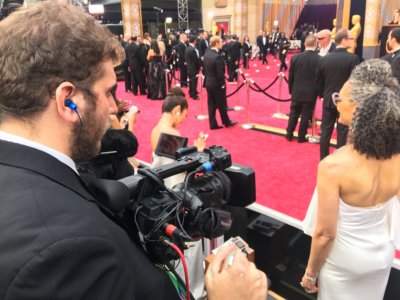 Who Else Would Bring Snacks to the Red Carpet Except for The Chew?

Chew on this! Carla Hall from The Chew was on the Oscars Red Carpet this time last year throwing muffins at celebrities.

If you’re not familiar with the show, The Chew is like The View geared towards foodies. The show sent host Carla Hall and our San Francisco video crew to the one place where celebrities are most hungry – the red carpet! The Oscars are the most prestigious awards ceremony in film and its red carpet is just as prestigious and glamorous. But glamour aside, celebs are busy getting ready all day and always complain about not having time to eat. So Hall came prepared!

She tried to reel in stars for interviews by tossing yummy muffins their way. She managed to catch Seth Rogen, Keith Urban, Kirsten Dunst and more! The night was a fun, crazy whirlwind of celebrities, cameras, and camaraderie.

This year, the 90th annual Oscars take to the stage with hopefully less confusion than the 2017 show. After last year’s debacle where announcers mixed up the Best Picture winners, announcing La La Land when Moonlight actually won, this year’s show is sure to draw a crowd celebrating the 90th anniversary and wondering if there will be any more major mistakes.

This years nominees for Best Picture, Best Actress, and Best Actor include some extremely talented and deserving names. Nominations for the Best Picture are “Call Me by Your Name,” “Darkest Hour,” “Dunkirk,” “Get Out,” “Lady Bird,” “Phantom Thread,” “The Post,” “The Shape of Water,” and “Three Billboards Outside Ebbing, Missouri.” Nominees for Best Actress are Sally Hawkins in “The Shape of Water,” Frances McDormand in “Three Billboards Outside Ebbing, Missouri,” Margot Robbie in “I, Tonya,” Saoirse Ronan in “Lady Bird,” and Meryl Streep in “The Post.” Best Actor nominees are Timothée Chalamet in “Call Me by Your Name,” Daniel Day-Lewis in “Phantom Thread,” Daniel Kaluuya in “Get Out,” Gary Oldman in “Darkest Hour,” and Denzel Washington in “Roman J. Israel, Esq.” Whoever wins, they’ll probably be in need of a celebratory muffin!

Jimmy Kimmel hosts for the second year in a row, so we know it will be entertaining to say the least! We know we will be tuned in!