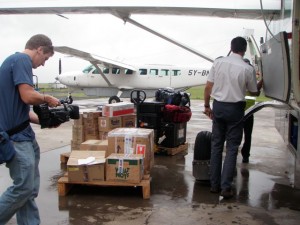 Over 50+ hours of airtime, shooting in places the UN can’t even travel to, and two weeks of only rice and beans… Sounds like a job for Go To Team! Orlando based crew Dan Lowrey took an amazing trip to Akot, Sudan where he spent two weeks filming a health clinic run by a organization called Mustard Seed International. Dan experienced some of the most remote villages in Africa where he had the rare opportunity to step into the lives of the local Sudanese people and see their daily struggles. These webisodes will give you an inside look to his great adventure!

This first video takes you through Dan’s flight into Sudan and his first encounter with the Sudanese people. The presence of a plane in the area is very rare and raises curiosity throughout the village. Dan quickly realized that he was the “odd man out.”  People looking at him as if he were an alien.  Check out his story!

Packing up everything in Nairobi, Kenya for the flight to Sudan.[/caption] 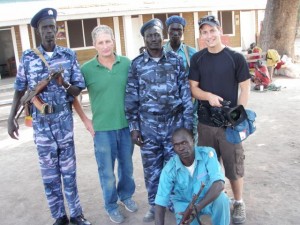 Our local protection when we were filming