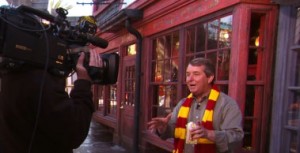 With Go To Team’s offices on the back-lot of Universal Studios, we get to see – first hand – the excitement of the crowds each day.  And now the Miami Herald is reporting what we’ve all been witnessing:  that at just half a year into The Wizarding World of Harry Potter, Universal Orlando’s full-year attendance is BOOMING! In fact, Potter has helped boost attendance by 20%.

We were thrilled to be involved with the Harry Potter Launch and get to shoot the stream of media that came to tour the new attraction.