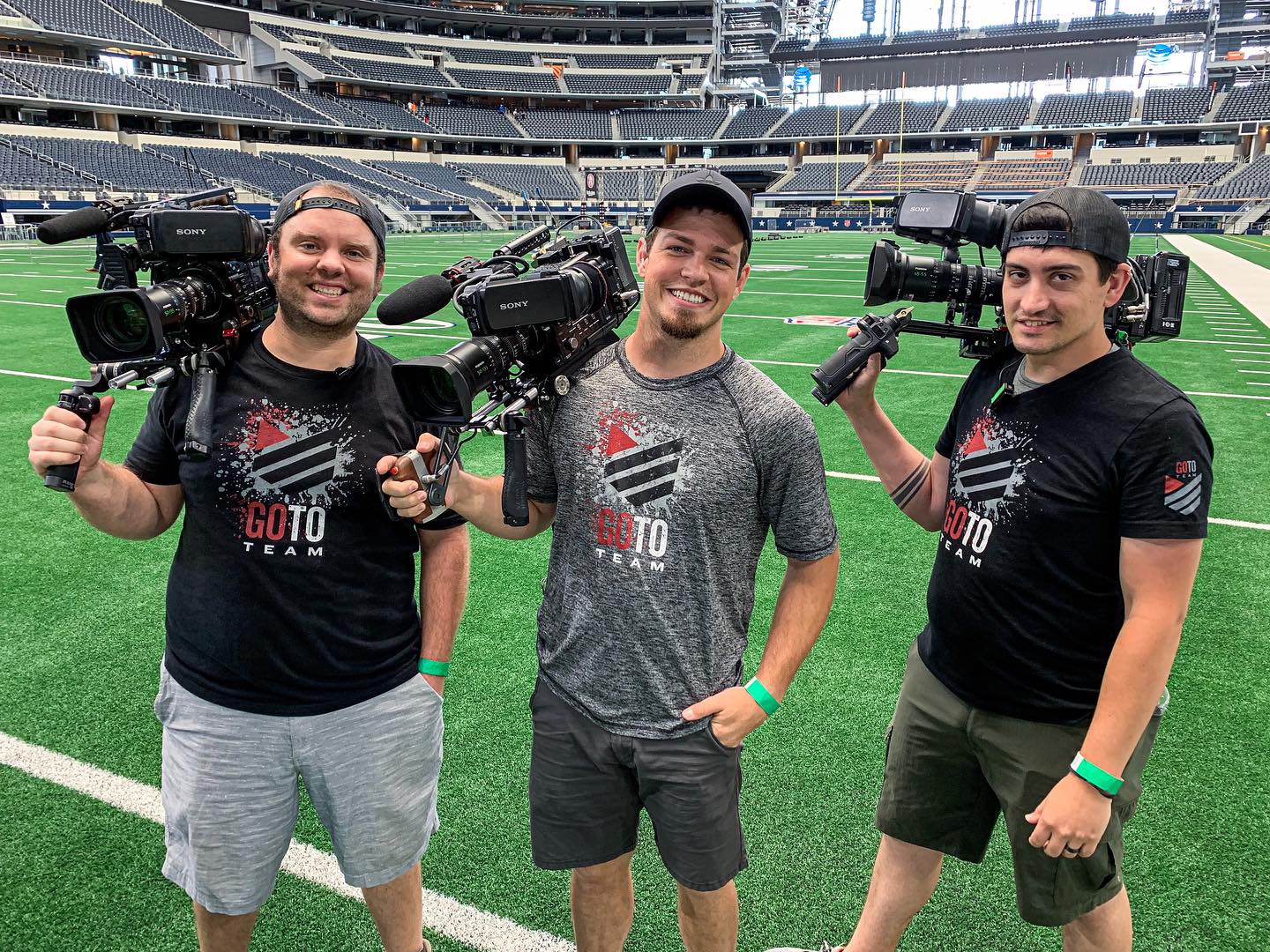 When you think of Dallas, TX, there are probably more than a few sports icons that come to mind. One of those being the Dallas Cowboys and more specifically the Dallas Cowboy Cheerleaders. Recently our Texas crews (Roger Woodruff, Kirby Clarke, and Nate Galluppi) had to the opportunity to team up with Viacom and the CMT web promos department to shoot some online content to tease the upcoming season. 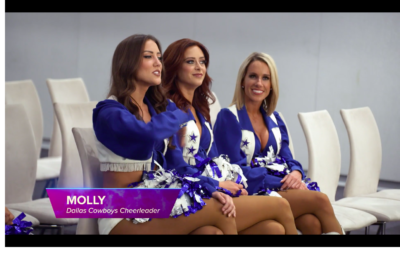 “I can safely say, we showed up in force for this project. Starting with a scout day, the day prior to the shoot day, I was able to tour AT&T Stadium with the production team to ascertain what elements we were to capture the next day.” – Dallas DP, Nate Galluppi 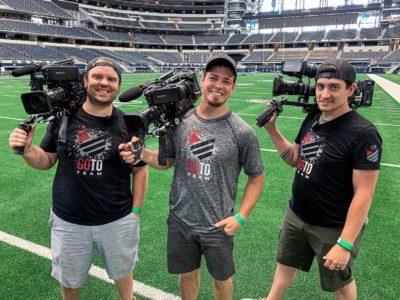 This involved a lot of walking and touring nearly every space of the 100,000 seat stadium, from the basement to the nosebleed section.

So what did the equipment package look like for this shoot?

On shoot day, our crews arrived ready to roll with three Sony F5’s kitted out with Fujinon MK Zooms, which are great lightweight cine zooms. The weight of these lenses come in handy since most of the day involved us being mobile. Along with my F5, the crew also brought in a Sony A7Sii on a DJI Ronin, stabilizer. Also included in the gear package for this shoot was Galluppi’s MYT Works 4′ Slider. 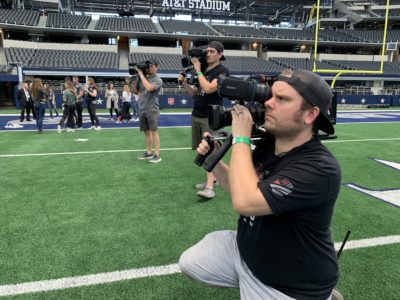 Awesome. So now I want to know about the workflow…

The day involved several key elements that would become separate videos online. The first thing we set up for was a “React-To” video shoot. This was actually the second thing we shot the day, but the first thing we set up. For this, we set up a 3-camera interview style shoot, with the talent Kelli and Judy, who would be watching a monitor with videos from previous seasons, talking and reacting to them.

We had two single shots on each of the woman, as well as a wide 2-shot which was on the slider, to create some dynamic movement throughout the scene. The scene was taking place in the media press box, overlooking the field and the stands of the stadium. This gave us great natural backlight and background. To compensate, we kept the lighting pretty simple, utilizing two LitePanel Astra 6X with soft-boxes on them to give us a nice soft light source to match the background lighting. 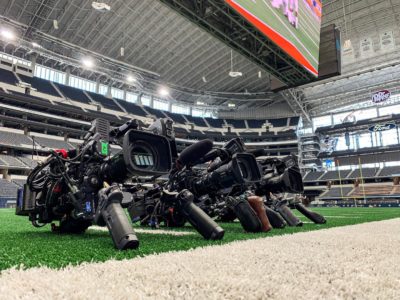 From the press box, we moved to the field level of the stadium. This scene involved several Dallas Cowboy Cheerleaders and Judy teaching former Cowboy’s Linebacker Bradie James the touchdown dance routine. This scene was an absolute blast to shoot. We used all three of our F5’s, two with the Fuji MK 50-135 and one with an 18-55 lens mounted on them to capture the practice/teaching session with Bradie. This was a pretty straight forward 3-camera cross-coverage scenario. Each of the long lenses held a tight of one of our mic’d talent, while the wide lens kept a safety wide shot the entire time. When it came time for the performance section of the video, this is where we had some fun. Utilizing a DJI Mavic and a certified drone op and spotter, as well as the A7Sii on the Ronin.

“I feel like we made a music video out of the performance. The cheerleaders were decked out in their game uniforms, and Bradie even had his own special uniform for the day. It was a lot of fun, and was super awesome working with great talent that was all super into it.” – Nate Galluppi 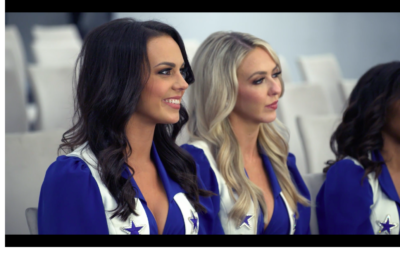 Okay, okay, we know you want to hear more about the Cheerleaders…

The last element we shot, which involved the most movement, was an all-inclusive tour of the stadium, led by another star of the show, former security guard and now tour guide, Phill Whitfield. This tour took us from a massive drone shot outside and led us into the bowels of the stadium, from the Cheerleader locker room to Jerry Jone’s private box “The Perch” and beyond. The entire tour was shot on the Ronin with the A7Sii taking the lead, MTV cribs style (does anyone remember that show?), with one of our F5’s with Roger shooting as a support 2nd angle cutaway shot. Kirby followed along behind the tour, getting any necessary b-roll of the space that was discussed in each scene. The entire tour culminated in the final scene being in some of the best nosebleed sections seats money could buy. As Phil says, any seat in the house is a great seat! 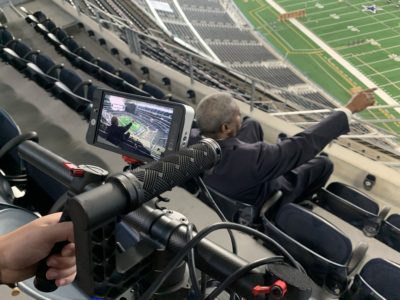 We would love to give a huge thank you to Viacom, CMT, and the Dallas Cowboy Cheerleaders for including Go To Team crews on this unique experience. We cannot wait to work with you all again in the future!

Ready to be part of the action? View the full piece here! 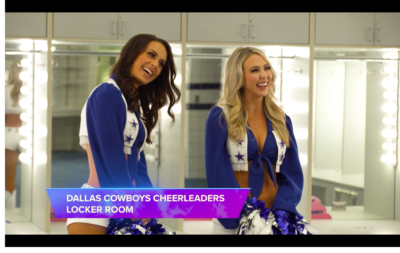